He raised the torch high, the firelight casting dancing demon-shadows across the irregular cave walls. He ran a calloused hand with delicate precision across the rough surface. A smile creased his face. Yes, yes. This spot would do very nicely. He set down the torch, stepped up to the rocky canvas, and began working in earnest.
***
It almost defies the imagination to think that a moment of artist inspiration, somewhat loosely akin to the fictional account above, occurred in a cave in south-western France some 13,000 years ago and evidence of said event still exists today. In fact, the Cave of Niaux, Grotte de Niaux, is home to numerous galleries containing beautifully-rendered wall paintings. Archaeologists date the site to the Magdalenian period between 17,000 and 11,000 years ago. The artwork found in these cave galleries is typical of the style prevalent in the Magdalenian Period, called simply black-outlined style. One of the most well-known paintings is located in The Black Hall, Le Salon Noir.

The predominating animal is the bison, represented in the upper part of the panel. The bison standing out in the left central part is usually catalogued as a female, due to the shapes presented, such as the scarcely prominent hump. By contrast and in opposition to this is the male, found on the right-hand side and showing a more prominent hump.

The lower part of the wall represents several horses which, with painted hair, represent a member of the equine family with a great amount of hair, the Przewalski. The bestiary is finished off with two goats, one represented in a very natural manner and the other in a totally schematic manner. The panel is dated as being 13,000 years old. (Wikipedia)

***
On 9 July, 1979, France issued a set of seven stamps in their ongoing Tourism series. In order to focus better on each stamp in this series, I will do a separate blog post for each. In this blog I'll take a close look at the 1,50 stamp, depicting artwork from the Cave of Niaux. This gorgeous stamp was designed and engraved by Marie-Noelle Goffin. 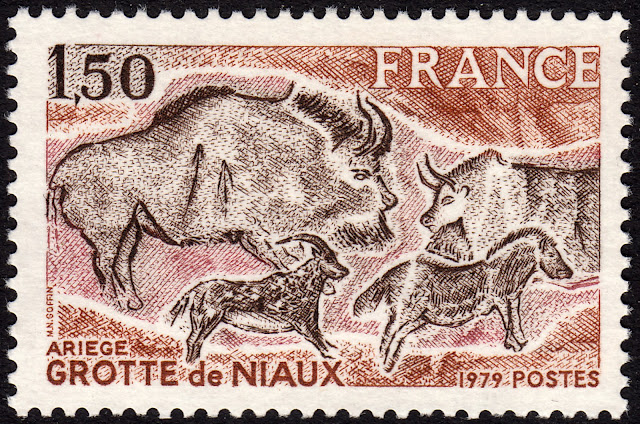 Marie-Noelle Goffin has done a splendid job, reinvigorating this artwork and rendering it in stamp form for the world to share. Dominating the centre left of the stamp is a majestic bison, which as mentioned in the quote above, has been deemed by experts as a female due to that fact that it is depicted as possessing a small hump. 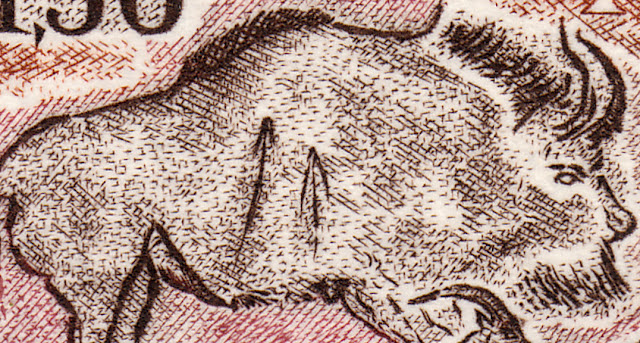 ***
The bison to the right is considered a male, due to its large hump. ***
Elsewhere on the painting, we see a goat (bottom left) and a female horse (bottom right). 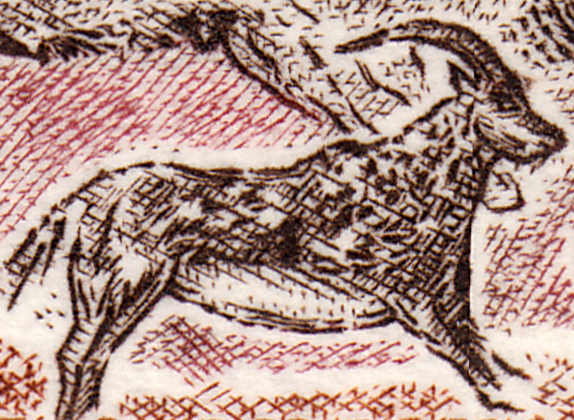 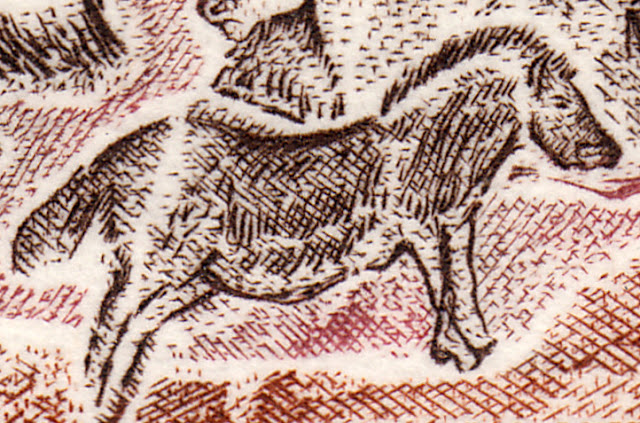