It started life as a grand palace in 1309, it saw a mighty clash of religious leaders in 1415, and in 1502 it was besieged, resulting in a portion of its structure being destroyed. This is the intriguing life of the Palace of the Kings of Majorca.
***
In 1276, King James II of Majorca decide to make Perpignan the capital of the his Kingdom of Majorca. Enlisting architects Ramon Pau, Pons Descoll, and Bernat Quer, he set about planning the construction of the palace on the hill of Puig del Rey. It was to be constructed in the Gothic style, surrounded by sprawling gardens. The palace was completed 35 years later in 1309.
A little over 100 years later in 1415, the Holy Roman Emperor, Sigismund of Luxemburg, arranged for a summit to be held in the palace. The purpose of the gathering was an attempt to coax the Avignon Antipope Benedict XIII to resign his office and hopefully bring an end to the Western Schism (a split within the Catholic church, from 1378 to 1417). This proved a futile gesture, and after a verbal clash with the Antipope, the Roman Emperor left Perpignan on 5 November, presumably with copious quantities of steam pouring from his ears!
Then a little less than 100 years after the epic debate, the palace was the unfortunate host of a siege in 1502. This siege resulted in the destruction of a part of the northern wing. Fast forward a little over 150 years to 1659. Following the Treaty of the Pyrenees in 1659, many of the defensive features of the palace were added.
If we skip forward a further 300 years to 1958. In this year, the palace and its magnificent gardens was purchased by the General Council of the Pyrénées-Orientales. Since then it has been home to the French Ministry of Defence, a rather fitting use.
***
On 9 July, 1979, France issued a set of seven stamps in their ongoing Tourism series. To read Part 1, click HERE In this blog I'll take a close look at the 1,70 stamp, which showcases the Palace of the Kings of Majorica. This lovely stamp was designed and engraved by René Quillivic. 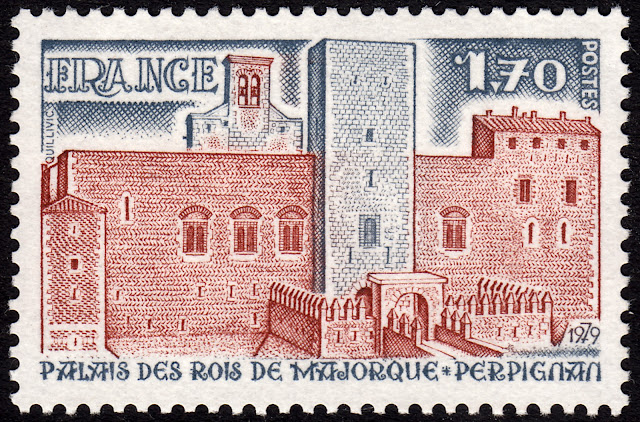 Admittedly, this stamp is predominately walls. But I feel it showcases the differing roles of the palace over the centuries with an almost brutal efficiency. I quite like it.