It would become known as Black Tuesday. The stock market crash on October 29, 1929, had devastating ramifications, plunging the globe into The Great Depression. In France, the Depression didn't take root until 1931, but between 1931 and 1935, as its effects assumed a tighter stranglehold on the country, there was a marked increase in unemployment levels. Struck particularly hard were those previously employed in intellectual and artistic pursuits. In fact, jobs for intellectuals and artists had been on the decline since the conclusion of World War I. Indeed, a body known as the CTI (Confederation of Professional Workers) was created in 1919 in an attempt to aid intellectuals in re-injecting themselves into the workforce. So what exactly was the definition of an intellectual? According to the CIT:

"An intellectual worker is one who derives his livelihood from a work in which the effort of the mind, with what it entails, initiative and personality, usually prevails over physical effort " (Chariot, 2006)

But however noble the cause of the CIT, it was not all that successful. Then on 6 February 1933, a body known as Help for Intellectual Workers (ETI) was created. This body and its president, Paul Grunebaum-Ballin, seemed to have far more insight than the CIT regarding potential schemes for the establishment of work for intellectuals and how to raise money to implement these schemes. One such scheme used as  its model an idea implemented in the US. Basically the idea was to provide jobs for intellectuals in public libraries performing such tasks as the "classification of books and the establishment of directories and catalogs." (Chariot, 2006)  But how does one raise funds to implement such an initiative? Simple. Surtax postage stamps!

"Surcharge stamps are "special stamps": the stamp has franking value only for its face value without the surcharge. It is not used to pay for a postal service. It is usually paid to a charity (In this case, intellectual aid)." (Chariot, 2006)

***
On 9 December 1935, France issued a set of two stamps, printed in recess, for the benefit of unemployed intellectuals. Master engraver, Achille Ouvré, was commissioned to design and engrave one stamp. The other stamp in the set was designed by René Grégoire and engraved by Omer Désiré Bouchery. Interestingly, this is the one and only stamp Omer Désiré Bouchery engraved for France. He was known primarily for his illustrations. A bit of a shame he didn't engrave more stamps; he certainly had a talent for it.

The stamp designed by René Grégoire and engraved by Omer Désiré Bouchery had a value of 50c with a surcharge of 10c to aid those unemployed intellectuals we spoke of earlier. This stamp features France, personified as a woman, lending aid to an intellectual. Interestingly, the setting of this stamp lends itself to the environment of a library. 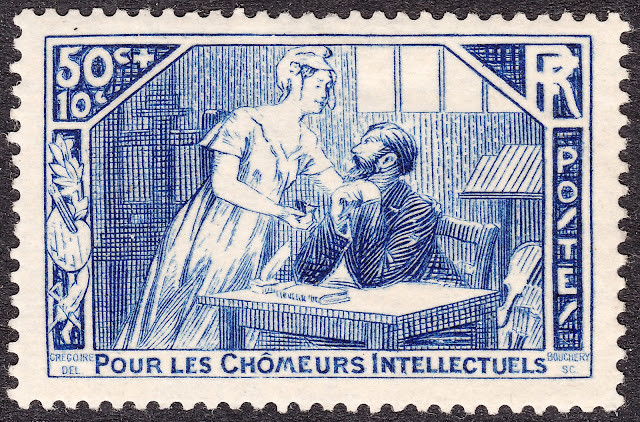 ***
The stamp designed and engraved by Achille Ouvré, and a favourite of mine, had a value of 50c with a surcharge of 2f, a much higher surcharge than the previous stamp. Perhaps a surcharge that was too steep, but we'll get to that in a moment. In this stamp we see a beautiful young woman representing the arts, holding a small lyre. Truly stunning. 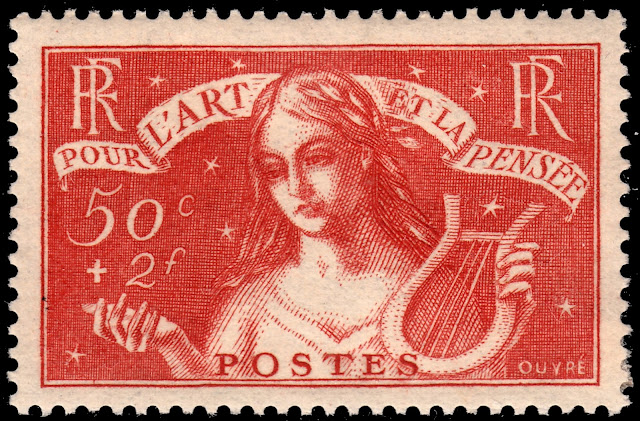 ***
Then on 14 October 1936, a little under a year later, this stamp was reissued with a brand new overprinted surcharge of 20c. Was 2f simply too much money to expect the average citizen to pay? Maybe. Maybe not. But it certainly makes for an interesting addition to any Ouvré collection. 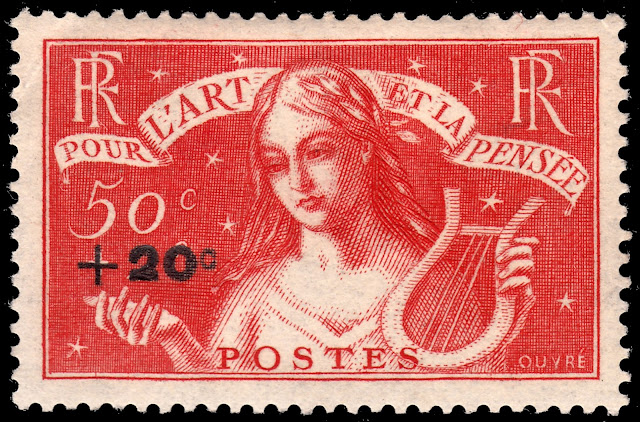 I Muse...On Another Engraver to Study

I'm fairly certain that I'm not alone in thinking that over the years the French Post has had many, many incredibly talented artists on their payroll engraving stamps. So many in fact that it can be rather overwhelming trying to collect all of their amazing work. My strategy to date has been to choose a particular engraver, and then spent some time getting to know their work and their style. And along the way start putting together the bones of a collection.
***
Most recently I've become intrigued by the work of Jules Piel. I haven't looked at much of his work yet, but what I have seen really impresses me. His first engraving, which was part of a definitive set for Andorra in 1932 is a true thing of beauty. Unfortunately I don't have a copy of the design, which was printed in six values, just yet. But I did find the below image. 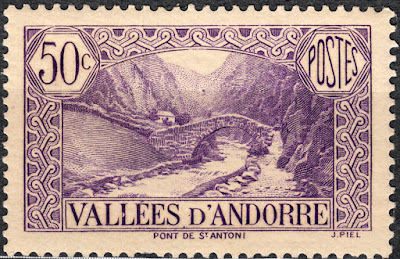 Between 1932 and 1966 Jules Piel was a prolific engraver for both France and her various colonies. For a full bio, check out this blog post HERE. Indeed, many iconic French stamps were the work of this master engraver. Perhaps the most important of these was a set depicting Marshall Pétain, issued in 1941. 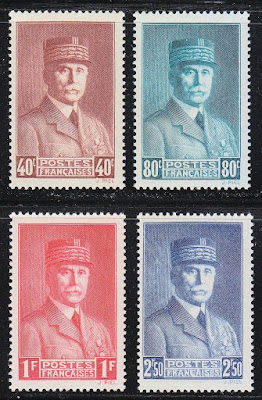 Commencing in 1950, France began issuing a set of stamps on an annual basis with a surcharge to go to the Red Cross. Jules Piel engraved this first set of Red Cross stamps. In fact, he contributed to every set until his retirement from the French postal authority in 1966. And I was delighted to discover that not only did Jules Piel rack up an extensive array of stamps, but he also engraved quite a few banknotes! I must say, I'm really looking forward to delving more deeply into the work of this prolific artist.
Until next time...
Posted by Stamp Crazy! at 01:44 No comments: