In 1770 Captain James Cook steered his ship HMS Endeavour into a bay on the east coast of the great southern continent then known as Terra Australis. He originally named it Stingray Bay, but then altered it to Botany Bay in homage to the wonderful botany specimens retrieved by botanists Joseph Banks and Daniel Solander.

Upon his return to England Joseph Banks raved about the beauty of Botany Bay. After Britain’s loss of the North American colonies, it was suggested that Botany Bay was an ideal spot to start a new colony. Lord Sydney was given the responsibility of devising a plan to settle convicts at Botany Bay. Lord Sydney chose Arthur Phillip as Governor for the new colony. This choice proved to be inspired. Governor Arthur Phillip was a great leader, and he ensured the survival of the early colony by nursing it through its darkest days.

On 13 May 1787, eleven ships under the command of Arthur Phillip, set sail from Great Britain to the shores of Terra Australis. In the fleet were 696 convicts – 504 male and 192 female. There were also 348 free people, the majority of which were marines, the colony’s police force.

On 18 January 1788, HMS Supply reached Botany Bay. After arriving it was quickly decided that this place so raved about by Captain Cook and Joseph Banks was not at all ideal. On 21 January Arthur Phillip and a small party including John Hunter left the bay in three small boats and headed north. They discovered an excellent site for the colony 12 kilometres to the north at Port Jackson. In a letter to England he wrote of the site,

“the finest harbour in the world, in which a thousand sail of the line may ride in the most perfect security...”

On 26 January 1788, the fleet sailed into a cove that Arthur Phillip named Sydney Cove in honour of Lord Sydney. On this day the British flag was planted and the land was claimed by Britain. Of course, the land already had occupants, the Aborigines! The relations between the European invaders and the Aborigines is a long story - one which I will not go into here. Suffice it to say, the Aborigines suffered greatly by the invasion.

On 1 October 1937 Australia issued a set of three stamps commemorating the 150th Anniversary of Arthur Phillip's landing at Sydney Cove. This set of stamps was designed and engraved by E.N. Broad and F.D. Manley. The original die bore the 2d denomination. Two secondary dies, in which the denomination was erased, were then created. These dies were engraved with 3d and 9d denominations by T.C. Duffell. 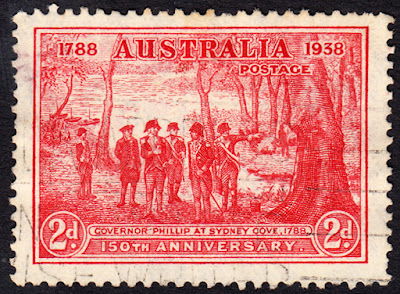 The details in this design are fantastic. The uniforms are striking. I love the depiction of the trees and the ground. In the distance to the left the three boats in which Arthur Phillip and his officers came ashore can be seen.