What is the most cost effective way to get started on a collection of French engravers? Especially when you consider the sheer volume of stamps within said collection, since we are not only talking about the stamps of France but also her many colonies. This is the question I started pondering a few weeks ago when I made the decision to build a French stamp engravers collection.
Obviously there's no easy answer to this. Building such a large collection is an immense challenge, and a very rewarding one. So back to the question: where does one start? The answer to this depends very much on the collector. My personal preference is to opt for year sets. My reason for doing it this way is threefold. Firstly, it is often a cheaper method, especially if you collect your stamps through a bidding site or a dealer to whom you have to add postage to the cost. Postage costs can add a lot of extra money to your purchases. Secondly, a lot of France year sets, especially in the years before litho took centre stage, were predominantly engraved stamps, so value for money is excellent. Lastly (but by no means least), it's quite frankly loads of fun to get a large batch of stamps in the mail to sort through. And that's what this whole collecting caper is for me. Fun!
With the primary method for building my collection sorted, I then considered where to start. Truthfully, the answer to this came rather spontaneously. I happened to spot an engraved stamp issued in 1974 that I quite liked, so I searched for 1974 year sets on ebay. I found a seller who had many different year sets available, all for around $10-15. I quickly grabbed the first three sets I saw. 1974, 1978, and 1979. 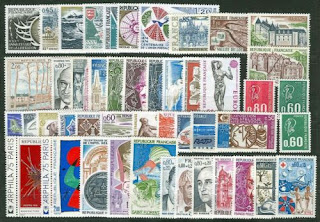 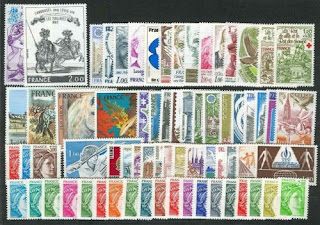 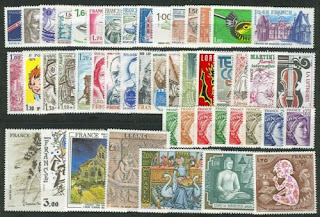 I got all three sets for just over $30. There are roughly 40 stamps per year, which works out at about 0.25c a stamp! Not a bad deal. This is why I go for year sets as often as I am able.
These three year sets just arrived in the mail. So the next few days will be spent - very happily - sorting them. And planning future blog posts for them. How much more value can one get?
Until next time...
Posted by Stamp Crazy! at 06:38

Email ThisBlogThis!Share to TwitterShare to FacebookShare to Pinterest
Labels: **I Muse...