France 1974 - The Pfister house in Colmar

In 1974, the 47th Congress of the Federation of French philatelic societies was held in Colmar, the third-largest commune of the Alsace region in north-eastern France. The city is home to some amazing architecture, an example of which will be seen in a moment. The city is also on the Alsatian Wine Route, and it is considered to be the "capital of Alsatian wine".
To celebrate the Congress of the Federation of French philatelic societies, France issued a truly stunning stamp on 3 June 1974. First Day Covers were produced with a 1 June date. The stamp was designed and engraved by Eugene Lacque. And what an incredible result he achieved! 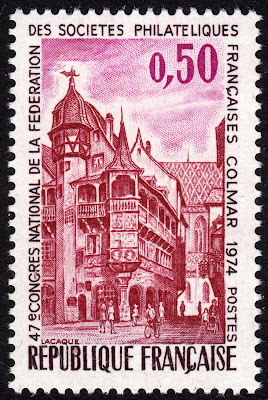 The stamp depicts Pfister house. The detail in this stamp is exquisite. The architectural details are clear and crisp, and the addition of people meandering on the street adds a sense of life to the overall composition.

Pfister house was built in 1537 for Ludwig Scherer. Scherer was a successful money trader, in it was in this capacity that he managed to become very wealthy. Wealthy enough to have commissioned such a beautiful house. 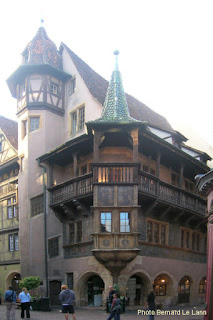 The house is a lovely example of renaissance architecture, drawing upon medieval styles. The foremost corner of the building that can be seen in the above image is known as a corner oriel. The building also features an octagonal turret to the left on the image, and a beautiful wooden gallery (verandah). The name, Pfiser house, comes from the family who lived in the building from 1841 to 1892 and in that time, they lovingly restored it to what we see today.