Jean-Baptiste Poquelin, better known by his stage name Molière, was born in Paris on 15 January 1622. Moliere was a French playwright and actor. In fact, he can be considered one of the greatest masters of comedy in Western literature. Some of his best known works are The Misanthrope, The School for Wives, Tartuffe, The Miser, The Imaginary Invalid, and The Bourgeois Gentleman. Moliere died on 17 February 1673.
***
On 22 October 1973 France issued a stamp to commemorate 300th Anniversary of the death of Moliere. The stamp was designed and engraved by Jacques Derrey. 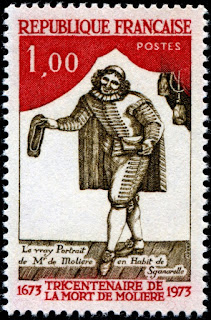