As the saying goes: "all good things must come to an end." But over the last few weeks we have certainly been treated with a lovely set of stamp engravings by Pierre Forget for Monaco, depicting the literary talents of French writer, Jules Verne. Indeed, we have shared time with a mad clockmaker, roamed through the haunted halls of towering chateaus, followed the adventures of dangerous rescue missions across the high seas, and we have even met the odd famous face along the way, including Captain Nemo himself!
***
We have now come to the final stamp in Pierre Forget's tribute to Jules Verne, issued by Monaco in 1978. If you wish to have a recap of parts 1-5, simply click on the following links.  Part 1, Part 2, Part 3 Part 4, Part 5. The final stamp, which has a face value of 5,50f, is listed in the catalogues simply as "Jules Verne and allegories". A description that becomes understandable after viewing the design. 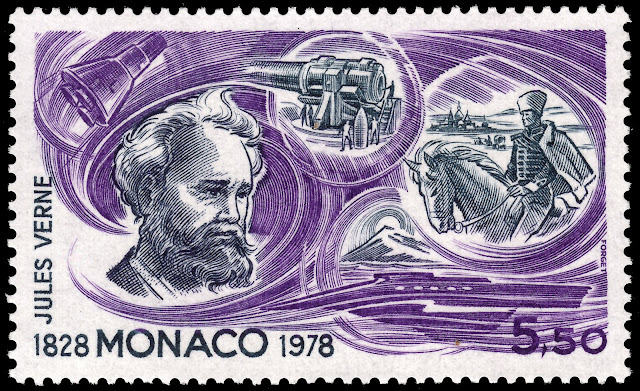 The primary feature of this design is - quite rightly - Jules Verne, himself. Surrounding the great man in a flurry of purple swirls are the seeds of story ideas, concepts made manifest in the form of still images. At the top left flies a capsule bound for the moon. In the top centre we find a less benevolent creation. One of the giant guns from Verne's dystopian story, Les Cinq cents millions de la Bégum (published in English as, The Begum's Fortune). At the bottom of the design, slicing through the swirls of creative thought, we see the sleek lines of Captain Nemo's submarine, Nautilus. The soldier on the horse to the right, I am unsure about. Anyone have any ideas?
Until next time...
Posted by Stamp Crazy! at 06:55 No comments:

Computers, tablets, smartphones, and all that other technology we rely on and take for granted these days, may not have even existed without the pioneering efforts of people such as Joseph Marie Charles, nicknamed Jacquard. And yet before a couple of days ago I will freely admit I'd never heard of the man. So who is he?
Jacquard, born 7 July 1752, was a French weaver and merchant, and perhaps most importantly, somewhat of a mechanical genius. Jacquard's father was a master weaver and property owner, so the family had a decent amount of money, yet Jacquard had no formal schooling. In fact, he was illiterate until the age of 13 when his brother-in-law, Jean-Marie Barrett, who ran a printing and book selling business, started teaching him. Barrett also introduced him to the world of scholars and high society. It is thought that initially Jacquard worked for his father, assisting him in the operation of his loom. Jacquard didn't particularly like the physical nature of the work, so he tried his hand at bookbinding and then with a maker of printers' type, an occupation known as a type-founder.
In 1772 his father died, leaving him a substantial inheritance including his house, looms, and workshop, as well as a vineyard and quarry in Couzon-au-Mont d’Or. It seems, however, that Jacquard was not much of a businessman, since there is evidence to suggest he ran up a substantial debt and lost all of his father's estate. Fortunately, his wife's dowry was substantial and included her own house, in which they were able to live.
By 1800 Jacquard was working as an inventor. It was in this capacity that he did his best work. In that very year, he invented a treadle loom. Then in 1803, a loom to weave fishing nets. But it was in 1804 that he came up with his best creation yet, a machine that became known as the “Jacquard” loom. This loom was designed to weave patterned silk automatically. The loom worked by using "pasteboard cards with punched holes, each card corresponding to one row of the design. Multiple rows of holes are punched in the cards and the many cards that compose the design of the textile are strung together in order" (Wikipedia). This early form of programmable machine played an important role in the development of other programmable machines, such as an early version of digital compiler used by IBM to develop the modern day computer. After some teething problems, the Jacquard loom took off. By 1812 there were 11,000 Jacquard looms in use in France. Jacquard died on 7 August 1834 in Oullins, a suburb in the city of Lyon, France.
***
On 19 March 1934, France issued a stamp for the 100th anniversary of the death of Joseph Marie Charles, honouring his contribution to industry. The stamp was designed and engraved by Achille Ouvre based on an artwork by Claude Bonnefond. Incidentally, this was the first small format stamp printed in intaglio issued by France. The source from which I got this information doesn't specify if it was the "world's first" or "France's first" small format intaglio issue. Anyway, to the stamp. It is a beauty. It also happens to be Achille Ouvre's first engraved stamp. 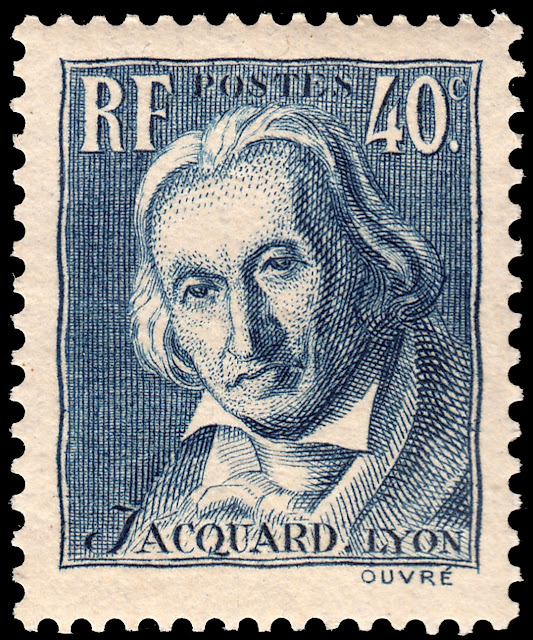 I have only just started studying the work of Ouvre, and I have to say I love what I have seen so far. I look forward to showcasing more of his stamps in the future...
Until next time...
Posted by Stamp Crazy! at 09:57 No comments:

Way back in 1956 a decision was made to create a common design stamp issue for the European community. The idea was not only to promote the rewarding pursuit of philately, but also to educate people in the history of Europe and the common roots that Europeans share. Thus the EUROPA stamp issue was born. Initially, there were six participating countries: Belgium, France, Germany, Italy, Luxembourg, and Netherlands. All participating countries issued stamps of the same design to be produced in their own countries, using their own printing techniques and engravers when applicable. The common design chosen for the first EUROPA issue was a tower in the form of the 6 letters of the word EUROPA. The design was created by Frenchman Daniel Gonzagu. France's first EUROPA stamps were issued in two values, and the 'common' design was engraved by Jules Piel. 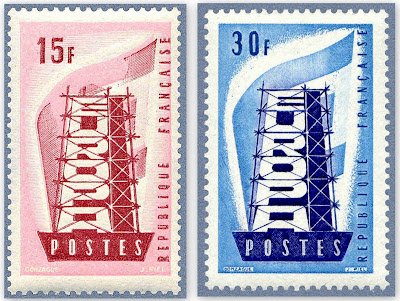 In 1957 EUROPA allowed participating countries to issue stamps based on the common "theme" instead of a common design. The theme was Peace and Welfare through Agriculture and Industry. This idea of providing the participating countries with just a theme gave individual designers freedom to come up with their own artistic interpretation of the theme. Incidentally, the number of participating countries had now risen to eight to include Saarland and Switzerland.
***
On 16 September 1957, France issued its EUROPA design, printed in two values. The issue was designed and engraved by Albert Decaris. Decaris has brilliantly captured the essence of the theme in his design. It features two hands. One hand is holding an olive branch and wheat, symbolising peace and prosperity through agriculture. The other hand holds a large gear, through which another olive branch is entwined. Machinery and nature are here almost one with each other in a symbiotic relationship. 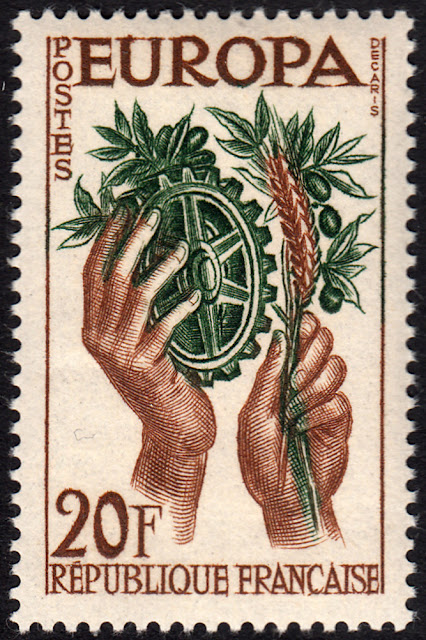 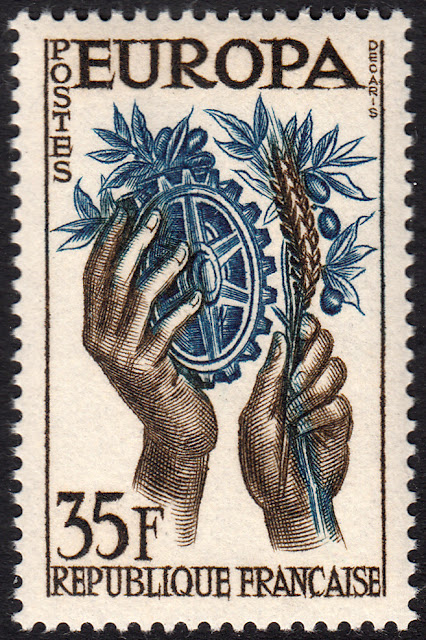 "The sea is the vast reservoir of Nature. The globe began with sea, so to speak; and who knows if it will not end with it?"

A shipwreck. A message in a bottle containing three cryptic clues. An epic search and rescue mission. All of this and more can be found in the pages of Jules Verne's 1867 novel, Les Enfants du capitaine Grant (The Children of Captain Grant).
The mystery begins when Lord and Lady Glenarvan of Scotland stumble across a message in a bottle. The message has been written by one Captain Grant, whose ship Britannia has gone missing, presumably wrecked. He has left behind two children, Mary and Robert. After finding the bottle, the Glenarvans petition to mount a rescue, but the government refuses. So they decide to do it themselves.  The only real clue they have from what remains of the message from the captain is latitude 37 degrees. So the expedition has no choice but to circumnavigate the 37th parallel south. The only other clues they have are a few words in three languages. These words are, of course, re-interpreted several times throughout the novel to make various destinations seem likely.

The expedition, which includes Lord and Lady Glenarvan and Grant's kids, then sets sail for South America in Lord Glenarvan's yacht, Duncan. Along the way they pick up a passenger, French geographer Jacques Paganel, who has apparently missed his steamer to India by accidentally boarding the Duncan. The expedition explores Patagonia, Tristan da Cunha Island, Amsterdam Island, and Australia.
In Australia they get what they presume to be their first solid clue. They happen upon the quarter-master of Grant's ship, Britannia, Ayrton. Then a series of coincidences that only Jules Verne could contrive occur. Firstly, it is discovered that Ayrton was actually a traitor and he'd been abandoned in Australia. As soon as the expedition members hear this, they discover that Ayrton has hijacked their ship. Believing the ship gone, the team decide to cut their losses and head back to Europe. But then the ship they are on gets wrecked off the coast of Auckland, New Zealand!

After escaping a  Māori tribe, they board a ship ... which just so happens to be the Duncan, their original vessel! Turns out the crew managed to overpower Ayrton and sail away. Then Ayrton bargains for his life by exchanging information on Captain Grant for being left on a nearby deserted island. When they get there, they can't believe their luck. Captain Grant just so happens to be living on that exact island! The successful expedition then sails off into the sunset, leaving Ayrton on the island to fend for himself. Incidentally, the rather devious character, Ayrton, reappears in Verne's later novel, L'Île mystérieuse (The Mysterious Island) published in 1874.

***
This is the fifth part in a blog series focusing on the 150th Anniversary of the Birth of Jules Verne stamp set, issued by Monaco on 2 May 1978. To check out the earlier parts, click on the individual parts. Part 1, Part 2, Part 3 Part 4. This beautiful set of eight stamps was designed and engraved by Pierre Forget. One of the stamps in this set features an artistic interpretation of the novel, Les Enfants du capitaine Grant. 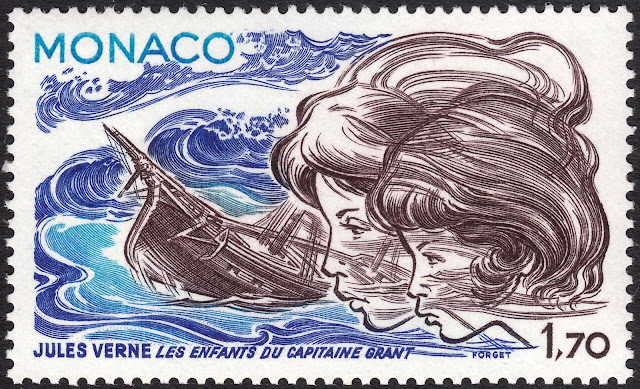 This stunning design features Captain Grant's ship in its death throes amidst a wild storm. Watching over the storm we see two women, who i assume are Lady Glenarvan and Grant's daughter, Mary. The wild blues and melancholy greys make this a rather poignant composition.