Sometime around 283 AD, a girl was born at Mariana in Corsica.The girl's name was Devota. Devota grew up as an ordinary girl, working as a servant in the household of senator Eutychius. Her only desire in life was to devote herself totally to the service of God. As part of her service to God, Devota decided to remain a virgin. Then in 303 AD her life was thrown into chaos when Emperor Diocletian launched the most severe Christian Persecution the Roman Empire had ever seen.
Devota's death warrant arrived by ship in the form of a man named Barbarus. Barbarus led a fleet of ships to Corsica, and upon landing set about purging the land of Christians. Of course, it didn't take long for Barbarus to discover that a prominent senator had one of those hated Christians in his service. Barbarus demanded that Devota be handed over to him. But to his credit, Eutychius refused. Outraged by Eutychius' defiance, Barabarus arranged to have him poisoned.
Devota was promptly taken into custody. She was imprisoned and tortured. Horrendous things were done to her. Her mouth was crushed and then she was dragged over rocky, brambles before eventually being stoned to death. The cruelty of these acts and Devota's bravery made her a martyr to her people. The local governor was horrified by this so he sought to have her body burned before it could be further venerated.
In what must have been a daring and clandestine mission, the Christians managed to secret Devota's body away, saving it from the flames. Hidden in a boat bound for Africa, her body was escorted by three men: the boat's pilot Gratianus (Graziano); a priest, Benedict (Benenato); and his deacon, Apollinaris. These brave men hoped that Devota would receive a proper Christian burial in Africa. Unfortunately, Devota's woes did not end with her death. A terrible storm overtook the boat, threatening to consign it to the cold depths of the ocean. Then a dove suddenly appeared and guided the boat to safety to present-day Les Gaumates, a principality of Monaco. After this Devota became known as Saint Devota. So says the legend, anyway!
***
On 7 December 1944, Monaco issued a set of nine semi-postal stamps commemorating Saint Devota. This blog will focus on the high value stamp, featuring the legend of the ocean journey of Devota's body. The stamp was designed and engraved by Pierre Gandon. 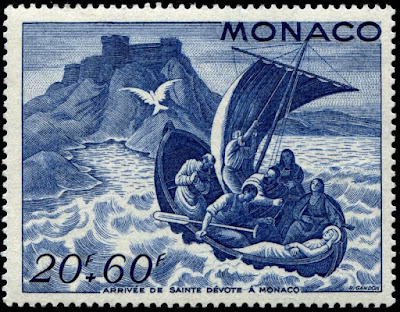 The stamp is a true masterpiece, packed with details of the legend. First, we see the boat battling against the high seas of a terrible storm. Inside the boat, the three men who escorted her body are working to keep the boat under control. Interestingly, there are also two women on the boat. Perhaps they were the ones who stole the body? And above the boat, we flies the miracle dove, guiding the body of Saint Devota and her brave rescuers to safety.
Until next time...