Ever wondered if it were possible to work side by side with your sibling every day of your life? Not really your speed? Well, this arrangement seemed to work for the French brothers, Edmond de Goncourt (1822–96) and Jules de Goncourt (1830–70). The Goncourt brothers not only worked together as writers, they were inseparable in their regular lives.

"Not only did they write all their books together, they did not spend more than a day apart in their adult lives, until they were finally parted by Jules's death in 1870." (Kirsch, 2006)

The brothers began their writing career after a "sketching holiday", about which they later wrote. Books detailing French and Japanese society and art followed soon after. Among several novels and a series of history books, they kept a journal which provides the reader with an intimate glimpse into the world of French literary society of the late 1800's. 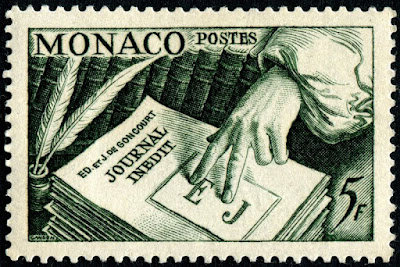 ***
On 29 June 1953 Monaco issued a stamp to commemorate the publication of the Journal des Goncourt, 1851-1896 written by the brothers Edmond de Goncourt and Jules de Goncourt. This truly gorgeous stamp was engraved by Pierre Gandon, And he did a sterling job on this one.

The image on the stamp is based on a book-plate for the journal, which was designed by Paul Gavarni. The etching for the book-plate was done by Jules Gancourt (I'd like to thank Natalie for providing me with information on the book-plate).

The image on the stamp - and book-plate - depicts a hand, presumably belonging to one of the brothers, caressing the manuscript of the journal. There are two fingers on the manuscript, one for each brother. And each finger is pointing to the initial of one of the brothers. Two quills standing poised to be picked up and used to scribble a few insightful words and a row of books in the background add a creative feel to the image. All in all, a fantastic composition.

Interestingly, during the design stage of this stamp Gandon only drew one quill in his proof. He sent this proof to Prince Rainier who liked what he saw but jokingly commented that with only one quill there would be fights over which brother got to use it. Gandon promptly added a second quill.
Until next time...