The date of the Queen Elizabeth II's Coronation was 2 June 1953, and it was expected of the Crown agents to produce a postage stamp design for use in 62 territories of the Commonwealth. This issue was designed and engraved at Bradbury Wilkinson & Co. The engraver was Robert George Godbehear. The mammoth task of printing the vast number of stamps required fell on the shoulders of De La Rue. 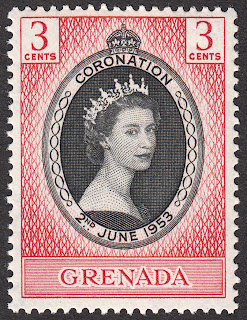 As fantastic as this design was, not all the territories of the Commonwealth used it. Many simply didn't bother to produce Coronation stamps. Four territories - Bahrain, Eastern Arabia, Tangier and Kuwait – overprinted the British Coronation stamps. Eleven other territories including Australia and Canada used their own Coronation designs. Indeed Great Britain chose its own designs, but that's another story.

So where did this design come from?

Before we answer that question let us break down this lovely stamp into its constituent parts. It was decided that this stamp be dual coloured, therefore two plates were required. The ‘key plate’ design which was the centre-piece of the stamp was based on a portrait of the Queen by Dorothy Wilding. Another Wilding portrait was used for the early Great Britain QEII definitives. This 'key plate' was uniformly printed in black.

So let us now return to the question: Where did this design come from? To answer that we need to look towards Grenada, particularly the definitive issue of 1953. The designers at Bradbury Wilkinson & Co. used this beautiful design as the basis for the Coronation Omnibus issue... 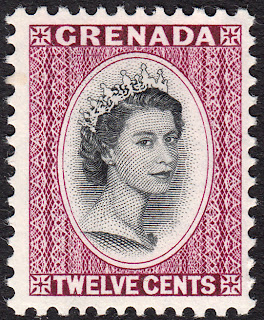 But it doesn't stop there. The Grenada 1953, indeed also the KGVI 1951, issues were based on an earlier, and lovely, design from the reign of Queen Victoria. In 1861 Grenada issued its first postage stamps bearing the colony name. The issue was stunning! 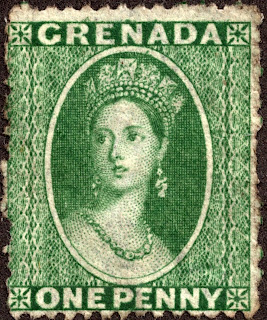 Before I sign off, here is an example of a Coronation Omnibus Plate Block from Falkland Islands Dependencies to feast your eyes upon.