SS Royal William was launched on 27 April 1831. She was a Canadian side-wheel paddle steamship named after the ruling monarch, William IV. She has been sometimes credited with the title of first steam ship to cross the Atlantic almost entirely under steam power, only using her sails when the boilers required maintenance in 1833. Although,  this seems to be an erroneous credit, since two other vessels had already made the crossing utilising steam-power technology; the Curaco in 1827 and the SS Suvannah in 1819. 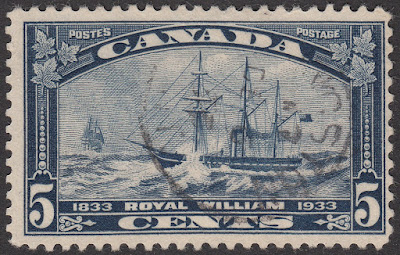 In 1933 Canada issued a beautiful stamp to commemorate the 100th anniversary of her Atlantic crossing. This stunning stamp was engraved by Bruce Hay. The stamp depicts the Royal William ploughing through the tumultuous waters of the Atlantic. We can see she is running umder steam as her sails are noticeably furled. This stamp contains so much life that if one were to stare at it quietly the wind and the sounds of the ocean can be almost heard. Well, almost!