In 1911 the Australia Post Office conducted a competition to find a design for a uniform Commonwealth of Australia stamp series (a mere 10 years after Federation. Better late than never, I guess!). The winner of this competition was Herman Altmann, who submitted several designs for the competition. The design featured King George V flanked by a kangaroo and an emu. Above the king were placed the badges of the six states. 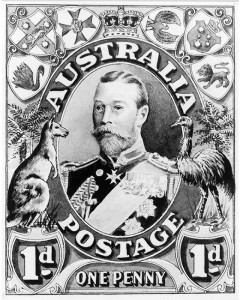 However, the Postmaster-General at the time, C.E. Frazer, rejected this design. As far as he was concerned, the design was not "Australian" enough. He refused to have a stamp issued with the king's head upon it. He also wanted a stamp that would work as an advertisement for Australia overseas. He had a simple stamp featuring a kangaroo designed. Accordingly, the first Australian stamp was issued in January 1913, the now famous, or infamous in some circles, Kangaroo and Map. 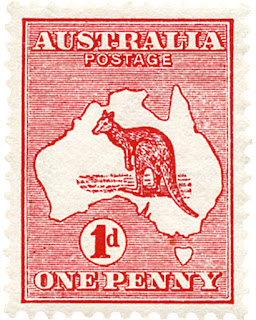 This stamp was ridiculed right from the word go. Monarchists hated the fact that the king was missing. And many people thought the kangaroo too simplistic compared to the elaborate stamps of the day. I personally like it, but who knows what I'd have thought if I'd been around when it was issued.

A few months after the "Kangaroo and Map" stamp was issued, there was a change of government in Australia, and the new Postmaster-General immediately set in motion the process of creating a stamp series featuring the head of King Gorge V. In fact, he planned to scrap the whole kangaroo and map series, but that plan, thankfully, never panned out.

Designer R.A. Harrison returned to the winning Altmann design and modified it to be suitable for an engraved stamp. So after all this rigmarole, Australia's first stamp featuring King George V was issued on 9 December 1913. The stamp was engraved by Thomas S. Harrison. And I think it is a stunner. Notice the vertical engraving lines on the hair. This was unusual for engraved stamp portraits. 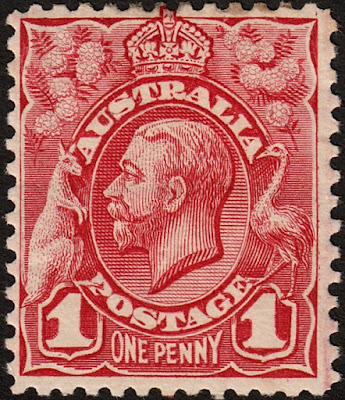 Unfortunately the engraved 1d King George V stamp lasted for less than a year. On 17 July 1914 the first of the iconic King George V letterpress side-face definitives appeared in Post Offices, and the rest, as they say, is history.