It can ignite our deepest passions. It can awaken such emotional beasts as sadness and despair. It enables us to live vicariously through the magical use of words, whether in metre or rhyme. This is Poetry.
***
Paul-Marie Verlaine, born 30 March 1844, was a French poet whose work is associated with the Decadent movement. The Decadent movement was, at the time of Verlaine, a shattering new style with lurid themes such as self-disgust, general skepticism, delight in perversion, crude humor, and a belief in the superiority of human creativity over logic and the natural world. Indeed, this movement was considered the fin de siècle or turn of the century movement.
Verlaine considered himself, along with a host of contemporary poets such as Stéphane Mallarmé, Arthur Rimbaud, Aloysius Bertrand, Comte de Lautréamont, and Alice de Chambrier, to be a poète maudit "cursed poet". He and the other poets mentioned were scorned by critics for their new, brash style of poetry. But in 1886, just two years after calling himself a cursed poet, opinions were to change based on the publication of Jean Moréas' Symbolist Manifesto. This book introduced the idea of symbolism, and suddenly Decadent poetry and all its subtleties began to make some sense. Now Verlaine and other poets were being termed "Symbolists". Verlaine's work studied the notions of human will, fatality. the power of unconscious forces, and - quite radically - the theme of sex in various forms, including with prostitutes. Themes associated with delirium triggered by narcotics and alcohol were also to be found.
Despite the use of such strong themes, Verlaine pointed out the need for subtle suggestion as opposed to brutal statement. His purpose was "to evoke moods and feelings through the magic of words..." (Wikipedia). Verlaine actually described his style - this "turn  of the century" style - in great detail in his poem Art Poétique. He stresses the importance of musicality and elusiveness. Further, he stresses:

"Keep away from the murderous Sharp Saying, Cruel Wit, and Impure Laugh."

As was the case with so many artistic minds of this era, Paul Verlaine was addicted to drugs and alcohol. In his later years he lived in the slums of Paris and public hospitals. He was often seen in cafes drowning his sorrows with copious glasses of absinthe. His drug and alcohol abuse finally got the better of him. He died in Paris at the age of 51 on 8 January 1896.
***
On 27 October 1951, France issued a set of three stamps celebrating modern French poets. The 12f value of the set depicts Paul-Marie Verlaine. This stamp was designed by Paul-Pierre Lemagny and engraved by Charles-Paul Dufresne. You will note that  the stamp featured in Part 1 of this series was also designed by Paul-Pierre Lemagny. An immensely talented designer. It is worth mentioning that the portrait of Verlaine used in this stamp was based on a portrait by Eugène Carrière. 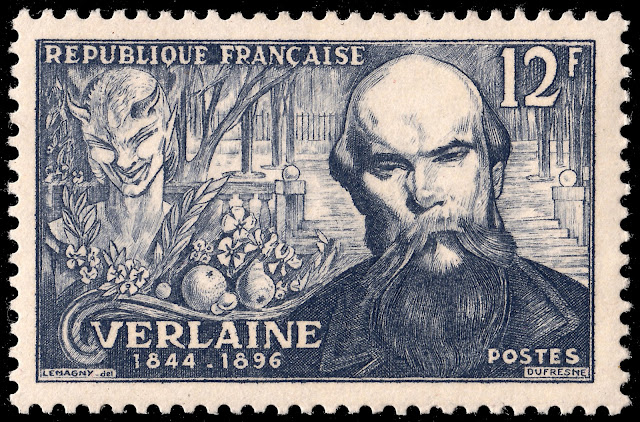 The composition of this stamp is fantastic.I love the way Verlaine stares directly at us, the viewer, as if ruminating on a new piece of poetic elusive symbolism. The design is also packed with stunning minute detail. Dufresne has done a masterful job in rendering the abundant flora to the left of the stamp. I particularly like, being a fan of engraved beards, the copious beard and moustache of Verlaine. In all, a brilliant composition. See below for a couple of close-ups.
*** 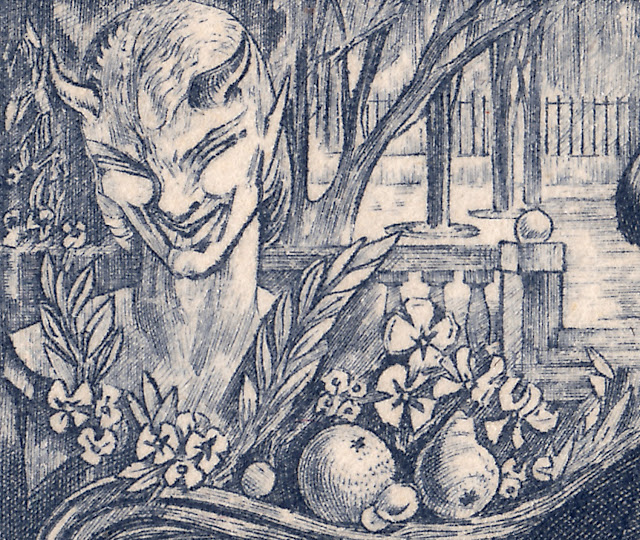 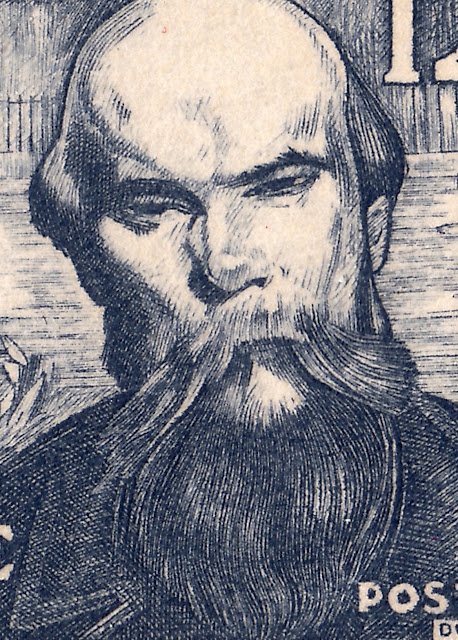