Constructed in the 11th century or possibly as late as the 12th century, the church of Saint Joan de Caselles (L’église Sant Joean de Caselles) is a stunning example of Andorran Romanesque art. The church is located in Canillo in the North-East of Andorra.
Upon entering the church one will immediately note its Romanesque church style: from the rectangular nave with wooden roof to the semicircular apse and Lombard style bell tower. And if you love to study interior decoration, this church won't disappoint on that front either. Perhaps one  of the most important pieces is the remains of a 12th century stucco depicting Christ. Around the stucco is a beautiful mural scene depicting the crucifixion with Longinus (the name given to the soldier who pierced Christ in his side with a spear) and Stefaton (the name given to the soldier who offered Christ a wine-soaked sponge), accompanied by the sun and the moon. If one were to venture beyond the gate behind the altar, you would be delighted to discover a magnificent altarpiece, depicting the life and martyrdom of Saint John, author of the Apocalypse (Revelations) and patron saint of the church. This altarpiece was influenced by the Italian and German Renaissance.
***
Between 1944 and 1947 Andorra issued a stunning set of twenty definitive stamps. The set includes four different designs, all engraved by Achille Ouvré. In this blog we shall study the first design in this set, depicting the church of Saint Joan de Caselles. It was designed and engraved by Achille Ouvré. This design was printed in four values, each with its own unique colour. And all four values were issued in 1944. 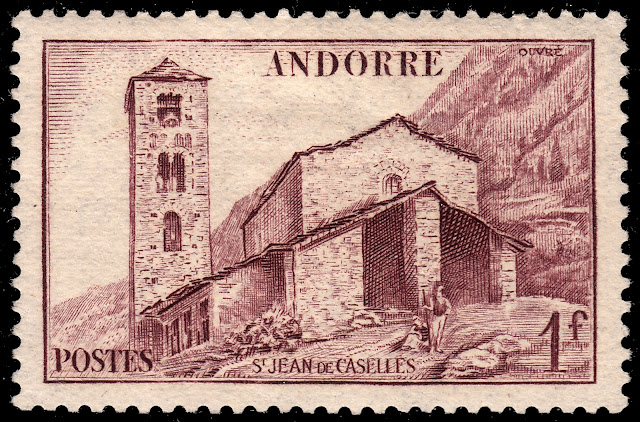 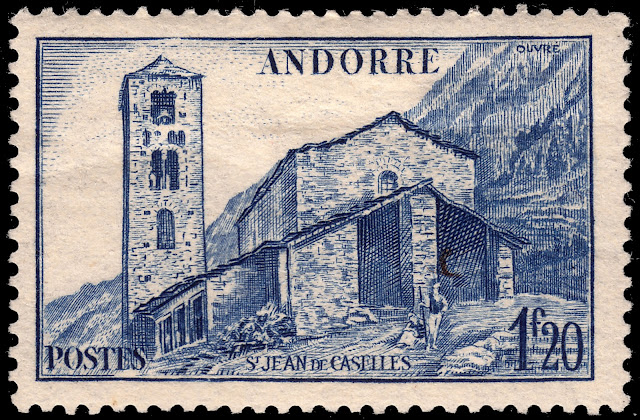 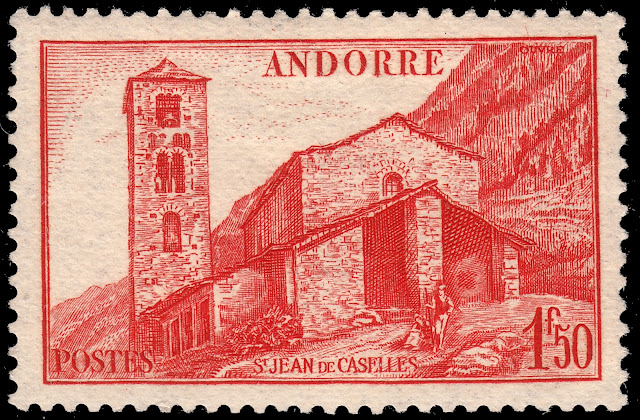 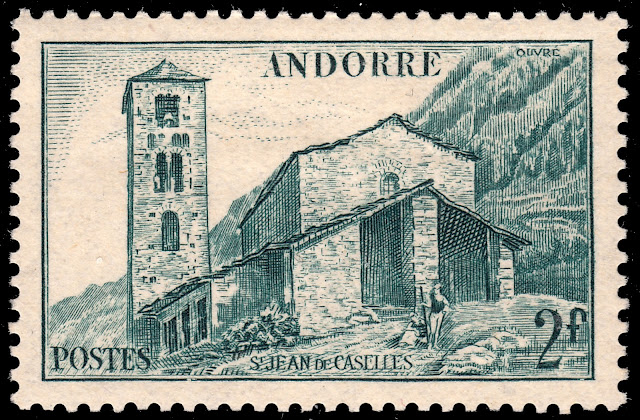 I love the composition of this design. Ouvré has chosen an excellent angle to showcase the ruined church nestled in the surrounding mountains. In the foreground stands a person, perhaps a caretaker and a weary traveller. dominating the left of the design is the church's striking bell tower. Beautiful. I can't wait to explore the rest of Ouvré's work on this series. Stay tuned!
Until next time...
Posted by Stamp Crazy! at 01:40