I Muse... On An Intriguing Journey

I am continually fascinated by the amazing stories a postal cover can tell us, its route, the places it passes through, and even the times of arrival and departure from said places. And of course the stamps affixed to the cover can also tell a story. Recently I purchased a cover that, in my opinion, has a fantastic tale to tell. Let's listen closely to see what it has to say...
Before the full cover is revealed, first, let's consider the stamps affixed to the cover.

On the left we have a stamp featuring an Morane-Saulnier MS 760 light aircraft. This stamp was issued 11 January 1960 as part of a four stamp Airmail series. The stamp was designed and engraved by Pierre Gandon. Incidentally, this is the second printing of this stamp. It was first issued 16 February 1969, bearing a value of 300f (old francs). The stamp on the right features the Isle of Gosier, Guadeloupe. It has a face value of 1f and was issued on 22 June 1970. This lovely stamp was designed and engraved by Pierre Béquet.  These two stamps give the cover a total face value of 4f.
***
Now we can reveal the entire cover! 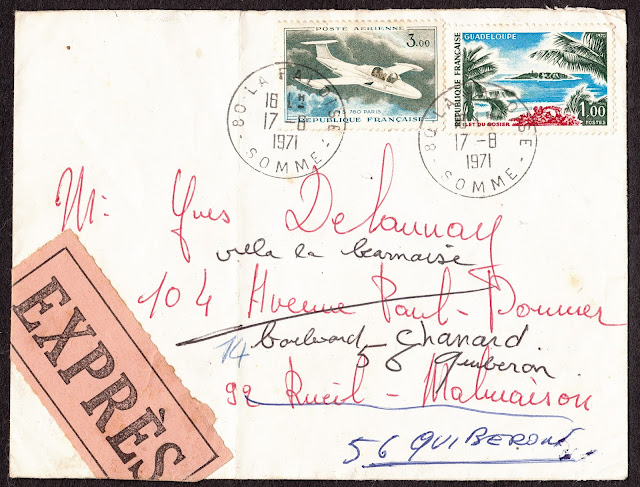 A beauty, isn't it! Immediately apparent from the front of the cover is that it was sent express, which probably accounts for the high franking of 4f, and that it was sent to two different locations. But more on that in a moment. From the two cancels tying the stamps to the cover, we see that it was posted on 17 August 1971 from La Faloise, Somme at 4pm. Interestingly, one of the stamps on this cover is over ten years old! Perhaps pulled from an old horde?
***
Now we can turn our attention to the reverse of the cover in order to decipher the journey it took. 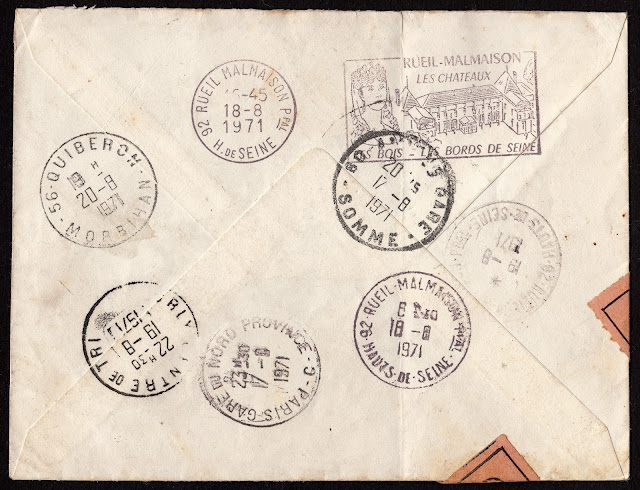 According to the cancels, the cover's first trip took place between 17-18 August. It left Somme at 4pm and arrived at Paris Gare du Nord at 8pm. Later that night it then left Paris Gare du Nord at 11:30pm. Its next destination was Rueil-Malmaison (Ile de la Cite, Paris) on the 18 August at 6am. The map below gives an idea of its journey. 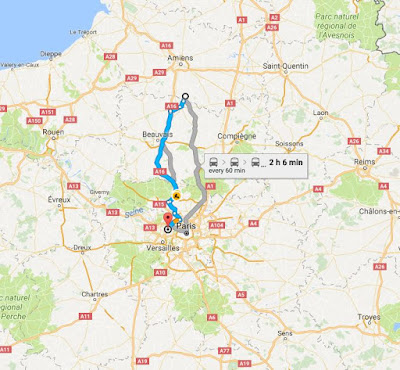 Then something happened. Either the person was no longer at that address or they wanted the letter sent on. Whatever the case, the cover was again checked in at Rueil-Malmaison post office and was on its way again at 4:45pm that same afternoon.
Now the cover takes a much longer journey, all the way to 74 Boulevard Chanard, Quiberon, where it arrives on the 20 August at 7pm. See the map below. 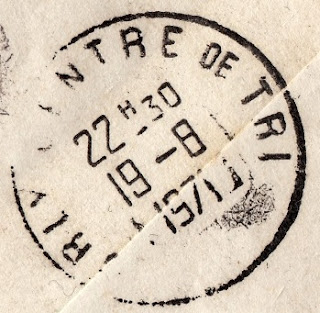 Wow! What a journey. This is precisely why I love covers so much.
Until next time...
Posted by Stamp Crazy! at 13:56

Email ThisBlogThis!Share to TwitterShare to FacebookShare to Pinterest
Labels: **I Muse..., 1960, 1970, Gandon (Pierre)