In 1834 a group of French Catholic missionaries landed on the island of Tahiti to convert the local population to Christianity. Not surprisingly the locals didn't take too kindly to this idea, and in 1836 the missionaries were expelled. Unfortunately this led to further problems. Deciding retaliation was the order of the day, the French dispatched a gunboat to Tahiti in 1838. By 1842 Tahiti and Tahuata were declared a French protectorate. And Catholic missionaries were from that point on allowed to do whatever work they found necessary. A year later in 1843 a new capital, called Papeetē, was founded. Then, in 1880, France annexed Tahiti, altering its status from that of a protectorate to a colony.

Between 1843-1903 more surrounding islands were annexed by France. In 1892 French postage stamps were first issued in the colony, which at that time was called: Établissements de l'Océanie (Settlements in Oceania). In 1903 the official name of the colony became Établissements Français de l'Océanie (French Settlements in Oceania) or EFO. The year 1957 saw another name change for EFO, a name we are now familiar with: French Polynesia. French Polynesia is composed of 118 islands and atolls spread across more than 2,000 kilometres in the South Pacific Ocean.

***
In 1948 French Settlements in Oceania issued a set of 19 definitives incorporating six different designs. To date, I have acquired two designs from this set. The first depicts a Tahitian woman. This lovely stamp was designed by Charles Mazelin and engraved by Jacques Boullaire. This design was issued in 4 values: 2f, 2,40f, 3f & 4f. 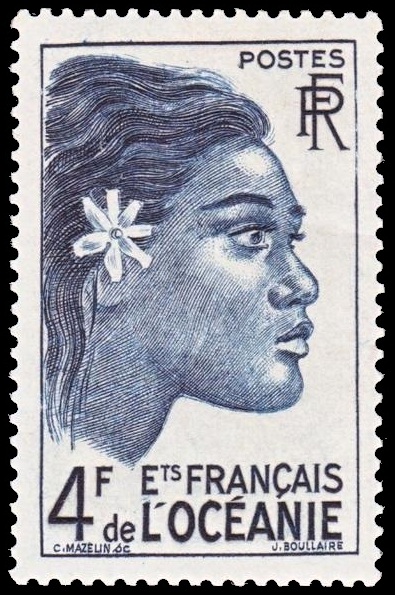 The second design depicts two Tahitian women enjoying the warm weather and having a bit of a chat. The stamp was designed by Jacques Boullaire (the guy who engraved the above stamp) and engraved by Jules Piel. This particular design was issued in 3 values: 15f, 20f & 25f. 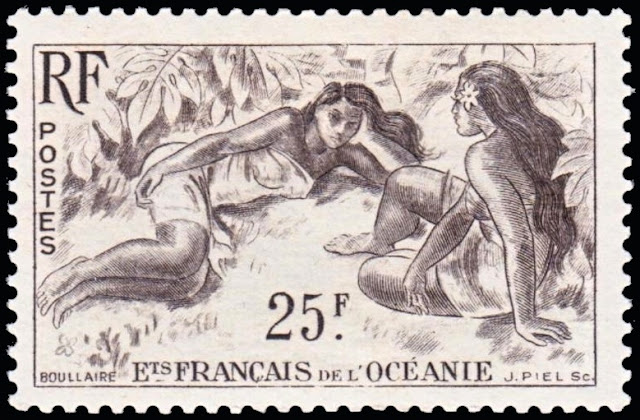 As I acquire more of this lovely set I will share them with you all.