How does a man go from brilliant military strategist intent on protecting France to a seemingly cold dictator craving ultimate control of said country? This is a question that has sparked controversy among military historians for decades. And just who is this man? He is The Lion of Verdun. Marshal Philippe Pétain. Hero or villain? You decide...

***
Philippe Pétain was born 24 April 1856 into a farming family. But farming didn't seem to be in his blood. In fact, what inspired him in his youth were the exciting tales told to him by his great-uncle, a Catholic priest, Father Abbe Lefebvre, who had fought in Napoleon's Grande Armé. Petain heard swashbuckling adventures set in Italy and the rugged Alps in Switzerland. So hooked by these tales was Petain that a military life seemed certain. But interestingly, this was not his first career choice. As a young adult he left home to study, of all things, philosophy!
But studying to think deep, philosophical thoughts didn't last. A year later, in 1876, Pétain enrolled at St Cyr Military School. His rather lack-luster results in the entry exam didn't bode well for an illustrious career. He finished 403 out of 412. Surprising, considering when he was at school he was considered quite intelligent. But undaunted by the initial test results, he studied with vigour and his results radically improved. In 1878 he graduated as a 2nd Lieutenant.
His military career progressed rather slowly and by 1911, some 33 years later he had achieved the rank of colonel. It should be said, that before World War I Petain saw next to no military action, serving mostly in garrisons in France, consequently the opportunities for promotion were not exactly lapping at his heels. Also, his rejection of long-standing French military doctrine probably didn't help his cause very much. His willingness to stand up and criticize French military strategy was a clear indication of his fear for the safety of France.
In 1911, Petain was given command of the 33rd infantry regiment at Arras. By this time he was teaching what was to become his trademark leadership style. He believed in meticulous preparation. That the role of artillery - the bigger the better - was necessary for victory in modern warfare. That information gathering and sharing, and effective reconnaissance were vital. That new technologies must be researched and utilized. And most of all, he advocated harsh discipline and good living conditions for the men.

Everything about this style seemed to conflict with the conventional wisdom of the day in the French army. It was widely believed that morale through dense infantry formations charging valiantly toward the enemy was the more honourable way to fight. Petain knew that with modern weaponry this was a useless style. He was to be proved right. In the early stages of WWI this antiquated approach to warfare led to the needless slaughter of thousands of Frenchmen at at the hands of the Germans, who had embraced modern technology and were putting it to devastating effect. Machine guns, and long-range artillery such as howitzers were now the order of the day.

"The lessons of fire cannot be ignored anymore. From now on, war will change in its character. Material will take an ever more considerable place, as factories will develop its power and quantity."

It was perhaps his new adaptive modern style of leadership that saw Petain rise from colonel to Lt. General in the first few months of the war. After some early success and a devastating loss at the Champagne offensive, he came to realize that success in this new war would not be gained through one off offensives but through a war of attrition. This belief was surely put to the test when he was given command of forces at Verdun.
At Verdun, he proved to be an excellent commander. He organised the very successful "sacred road", the main supply road in and out of Verdun. This road saw the movement of up to 90,000 men and 50,000 tonnes of supplies, per week in and out of Verdun. And when he saw the staggering death toll at Verdun he introduced a system whereby if a battalion lost a third of its strength it was replaced by another fresh battalion. This is why 70% of the French army fought at Verdun. After several months of fighting though, it was decided by the French Commander-in-Chief, Joffre, that more decisive attacks were needed in this campaign, and Petain was promoted out of the way. Command was given to Robert Nivelle.
This was not the last time Nivelle would steal Petain's thunder, as it were. At the end of 1916 Neville was chosen over Petain to replace Joffre as Commader-in-Chief of the French army. This is important, because in April 1917 after Nivelle had completely botched the Chemin des Dames offensive there were wide-spread mutinies in the French Army. Nivelle was ousted and Petain made Commander-in-Chief. Petain put an immediate stop to the mutinies by holding 3400 court martials. Additionally he promised no more suicidal attacks, that rest would be provided for exhausted soldiers, which included brief stays at home, and of course a return to moderate discipline. Indeed, Petain's treatment of the regular soldier made him a hero in the ranks. He was a "soldier's soldier".
By the end of the war, Pétain wax regarded as

"without a doubt, the most accomplished defensive tactician of any army."

On 8 December 1918, Philippe Pétain was presented with his baton of Marshal of France at a public ceremony at Metz by President Raymond Poincaré. He was also present at the signing of the Treaty of Versailles on 28 June 1919.

In the period between the First and Second World Wars, Pétain's battle arena changed from muddy fields to political arguments around a table. But his battles seemed no less heated. He violently opposed changes the government were making to the military, such as shortening the length of national service to a year. and the reduction of the number of standing infantry division to twenty. Pétain was seeing the military strength of France crumbling before his eyes. But what could he do? His was just one voice.

But he did what he could. On 1 March 1935 Pétain's now famous article was published in the Revue des deux mondes. In the article he reviewed the history of the French army since 1927–28, criticising the Militia (reservist) system in France. And he also attacked France's lack of adequate air power and armour. Meanwhile, Adolf Hitler announced just five days later the creation of Germany's new air force and it was increasing its army to 36 divisions. This new must have scared Pétain terribly. France was no match for Germany. Was this part of his rationale for his later decisions? Who knows.

Then in May 1940 what had been dreaded for some time became reality. Germany invaded France. Now, many things happened in a very short time - far too much to go into here. But a couple of things are noteworthy and perhaps attest to the altered mindset of Pétain. After the Germans pushed further into France in 24 May British forces began to retreat and they could no longer guarantee air support. The French government now started to discuss the possible need for an armistice with Germany. Britain responded to this by stating that if an armistice were signed Britain would have no choice but to bomb German occupied ports of France. Here we see a perfect illustration of the tenuous state of relations that can arise between nations. Both sides are quite justified in their positions. But there is really no mutually beneficial answers.

After the fall of Dunkirk on 5 June 1940 and with Germany closing in on Paris, the newly reshuffled French War Cabinet considered the possibility of leaving Paris and calling again on Britain. Pétain was against this move. He thought that France could work things out for themselves. He was probably already thinking armistice with Germany was the only way to save France.
On 10 June the government left Paris and moved to Tours. There was a growing feeling that fighting was useless and would only lead to destruction. Churchill flew to France to try to talk them out of an armistice with Germany, suggesting options such as guerrilla warfare within France. Pétain responded by simply stating that France no longer had the reserve forces to defend against the Germans. Incidentally, Pétain had years earlier fought to have more and better reserve units.

So, the upshot of all this was that some in the government still thought resistance against the Germans was the way to go. But these voices were outvoted. Some now even thought surrender was an option. But this was violently opposed by Pétain's camp. Subsequently, the current Prime Minister Reynaud resigned and Pétain was made PM. Shortly after this the government moved to Vichy.

Now 84 years old, Pétain took over the government completely, even going so far as to pass a law on 10 July granting himself what was essentially absolute power. His leadership seemed to go downhill from here. Among other things he began a persecution of Jewish people and he created his own army the "French Legion of Combatants". His outward friendliness towards Hitler did not win the man any brownie points either! Why? Who knows. Perhaps an overreaction to the fear brought on by the possibility of France being totally destroyed by the Nazis. Of course, no one will know the man's thinking or motives.

As a consequence of his pro-nazi actions as leader of Vichy France, Marshal Pétain was charged with war crimes, found guilty, and sentenced to death. But due to his advanced age his death sentence was commuted. He died in exile on 23 July 1951 in Port-Joinville on the island of Yeu.
***
On 31 March 1942, France issued a set of two stamps of the same design, featuring the bust of Marshal Petain. The stamp was engraved by Pierre Gandon, based on a design by Paul-Pierre Lemagny. This stamp design, printed in intaglio, was actually a re-engraved version of a stamp engraved by Georges Hourriez printed in typography and issued 21 January 1942. This stamp set was issued during the Vichy Government in France as a propaganda tool to support Marshal Pétain. In fact, many other stamps were issued in France for this reason during the Vichy government. 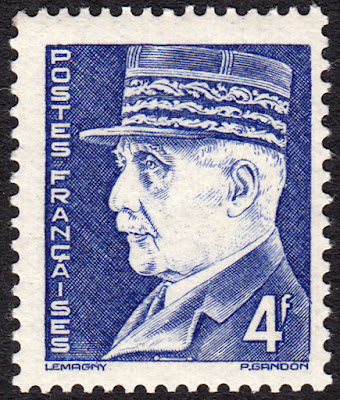 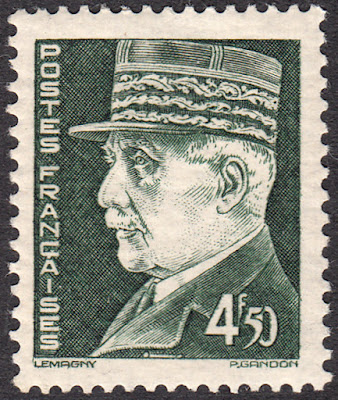 So there you have it. The story of The Lion of Verdun. Hero or villain? That is up to the individual to decide...
Until next time...
Posted by Stamp Crazy! at 07:52