The city of Reims, located about 130 km to the northeast of Paris, has seen quite a checkered history. From an ally of the Roman Empire to the location of a Christian miracle, and from bloody battles to wine-making. But I get ahead of myself! To proper discover the story of Reims we must jump in the Stamp Crazy Time Machine and travel back over 2000 years. So strap yourself in...

The area that became Reims (also spelled Rheims) was founded by the Gaul tribe known as the Remi and used as their capital. In 80 BC after the Roman conquest of northern Gaul, the area was made a Roman town, called Durocortōrum "round fortress". The Remi people, still living in the town, allied themselves with Rome during Julius Caesar's invasion (58-50 BC). They remained loyal to Rome during the subsequent Gallic insurrections that resulted from the invasion. Their fealty was rewarded, and subsequently the city grew. At the height of Rome's power the population possibly reached somewhere in the region of 100,000. More conservative estimates place it as between 30,000-50,000.

Over the course of the next five centuries the city was the site of several invasions. In 406 it was captured by the Vandals. In 451 Attila the Hun stormed in and put the city to the sword. Then in 496 perhaps one of the most momentous events in the city's history occurred shaping its destiny for centuries to come. Ten year after his victory at Soissons in 486, Clovis, King of the Salian Franks, was baptised in the city in the Abbey of Saint-Remi. He was baptised using the oil of the sacred phial, which was supposedly delivered by a dove from heaven specifically for the occasion. These supernatural events became a symbol for the monarchy's divine right to rule. Over time Reims became the traditional site of the crowning of the kings of France. The crowning ceremonies were held in Notre-Dame de Reims "Our Lady of Reims". This Cathedral is now a World Heritage Site and a popular tourist destination.

These days Reims is one of the main centres of Champagne production. In fact, many of the largest production houses in France, known as les Grandes Marques. Interestingly, the city of Reims sits atop a maze of tunnels and caves cut into the chalk. These caves, some dating back to Roman times, are used to store champagne while it ages.
***
On 15 December 1941, France issued the first of two series of semi-postal stamps. The surcharge on these stamps went to National Aid. The theme for the series was Coats of Arms of France. The 3f + 5f Coat of Arms of Reims stamp is the focus of this blog.This stamp was designed and engraved by Pierre Gandon. 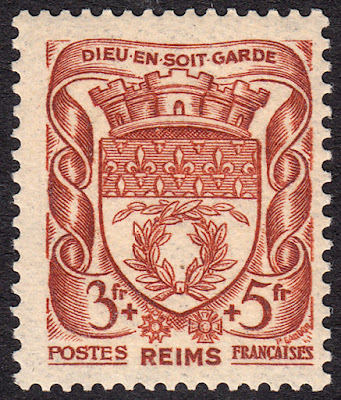 I spent a bit of time researching the Coat of Arms of Reims without much success. So I'm going to hazard a guess as to the meaning of the three main parts of the shield. I have created a key, see the image below, for ease of discussion. 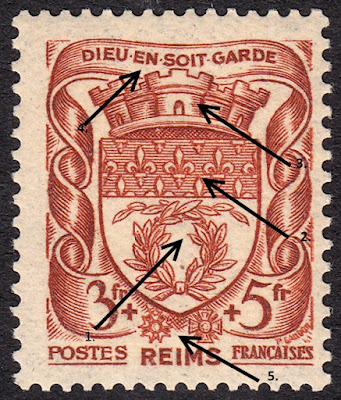 As an interesting little finishing note, I have noticed the Gandon signed his early work for France "P.Gandon".