I once heard that a city without a rail network is like a body with no arteries. Perhaps a slight exaggeration there, but nevertheless since the early to mid nineteenth century, trains have played an integral role in the industrial development of many, many countries.

The first railway lines appeared in France in 1823. These lines were generally quite short and used for mining. After seeing the success of larger rail networks in Britain, France decided it was time to develop their own railway system. This decision was, in part, to link with the existing system in Britain to boost trade.

One of the most important early French rail lines was the Paris-Le Havre line. The first section of this line to be built was the Paris-Rouen. In order to facilitate the construction of the line, the Paris and Rouen Railway Company was established. They appointed a man by the name of Joseph Locke as the head engineer. It is worth pointing out that this scheme had its fair share of opposition. Many believed it was detrimental to the landscape, primarily agriculture. France already had an established system of water-borne transport, which utilised the country's numerous natural waterways. It was argued that a rail system would create dangerous opposition to this established economy. But, in the end, industrial progress - good or bad - won the day. And on 9 May 1843 the Paris-Rouen line (the first section of the Paris-Le Havre line) was opened. The remainder of the line was opened om 22 March 1847. In total, this rail line stretched for 228 km. 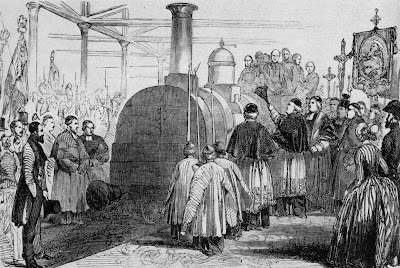 ***
On 10 June 1944 France issued a stamp commemorating the 100th anniversary of the creation of mobile postal services. The first use of the rail mail coach - from the tiny bit I've been able to discover - began with the Paris-Rouen line in 1844. The stamp was designed by M. Pelletan. 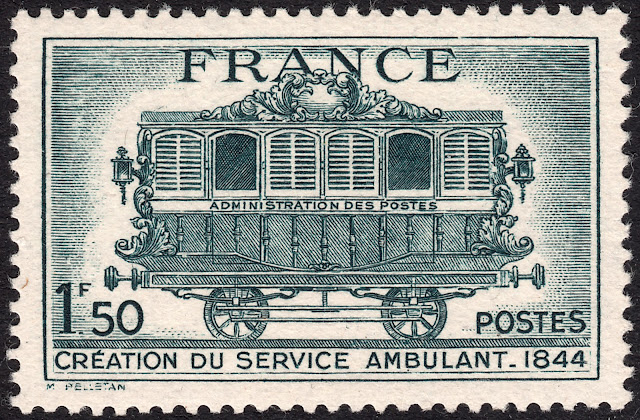 And the engraver... Well, that's where things seem to get interesting! There is no engraver name on the stamp. According to Stanley Gibbons, the engraver was Pellean. But... but everywhere I have looked on the internet, the engraving has been attributed to Pierre Gandon. Is this another case of Gandon's name not being allowed to appear on the stamp? Or is this simply a case of the name of the engraver being omitted for no good reason, other than that it just is? I don't know! If anyone can shed some light on this issue I'd be very grateful.