The Universal Postal Congress meets once every four years to tackle postage strategies for the coming four years and set future rules for international postage exchanges. The congress gathers at a different location for each meeting. The location for the 12th Congress in 1947 was Paris, France.

On 7 May 1947 France issued an Air Mail stamp to celebrate the UPU Congress in Paris. Pierre Gandon was chosen to engrave the stamp. From the moment I laid eyes on this stamp the adjectives began bouncing around my brain. Exquisite. Gorgeous. Stunning. These are but a few examples of what I think whenever I study this masterpiece. So without further ado... 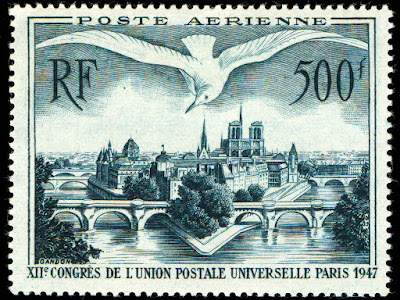 The level of detail in this stamp is superb (yet another adjective for you). There are two subjects in this stamp, and both have been handled with delicate expertise. The first subject is the seagull across the top of the stamp, which represents the Air Mail aspect of the stamp. Studying the seagull, we see it is riding a thermal over the great city with its head cocked to one side, enjoying the vistas.

The second and obviously the main subject of the stamp is the Île de la Cité, which is one of two remaining natural islands in the river Seine. It is literally the heart of the city, since all road distances in France are calculated from a point on the island. But more importantly the island was the birthplace of Paris, dating as far back as 250 BC. Back then it was called Lutetia.

The point of view in this stamp is from the east looking west. Gandon has drawn several details on the island for us to sink our teeth into. The first thing I noticed was the Notre Dame Cathedral, which can be seen at the middle right of the stamp. 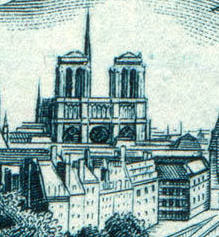 Turning our attention to the foreground, we can see a bridge spanning the Seine and crossing the western point of the Île de la Cité. This bridge is called Pont Neuf or New Bridge. But don't be fooled by the name. The bridge is hardly new from our perspective. On the contrary it is actually the oldest standing bridge across the Seine. Construction began in 1578 and it was completed in 1607.

Another feature that draws the eye is the copse of trees in front of the Pont Neuf. This is the Square du Vert-Galant, a small park named in honour of Henry IV, who had the nickname 'The Green Gallant'. 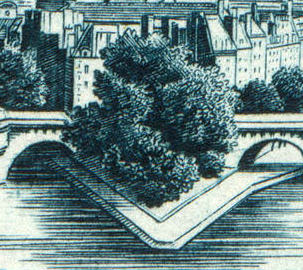 This stamp reminds me of a similar Air Mail stamp engraved by Albert Decaris, which looks at the Île de la Cité from the opposite direction. Notre-Dame Cathedral is also a central feature of this stamp. And in the middle right we can just make out Pont Neuf. 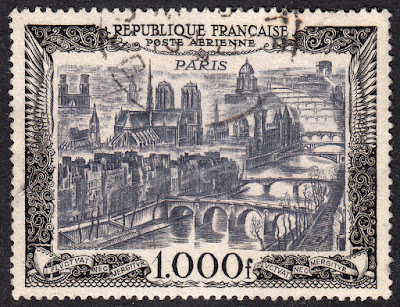 The Albert Decaris stamp used to be my favourite 'View of Paris' (for more on this stamp click HERE), but now I have to go with the Gandon stamp. What's your favourite?