Southern Rhodesia was a self-governing British colony now known as Zimbabwe. Over the years it has undergone numerous name changes. For more information click HERE

On 31 August 1953 Southern Rhodesia issued its first Queen Elizabeth II definitives. This lovely set consisted of 14 stamps, on unwatermarked paper. This series was recess-printed by Bradbury Wilkinson & Co (except the 4d stamp, which had a typography vignette). In this blog I'll focus on the first four stamps of the set.

The ½d grey-green and claret... 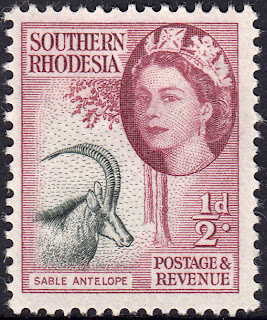 The focus of this stamp is the industry of tobacco growing. According to an article in Economic Geographic (July 1952 vol. 28, no. 3) the tobacco industry in Southern Rhodesia boomed after WWII. By 1950, a few years before this series was issued, tobacco had surpassed gold as the premier export of Southern Rhodesia. It is, therefore, quite appropriate that the tobacco industry be depicted on a stamp of the region... 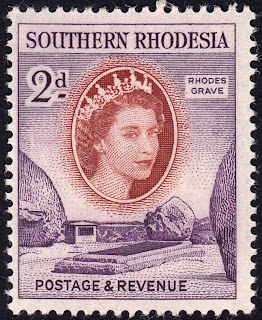 The focus of this stamp is Rhodes' Grave. Cecil John Rhodes (5 July 1853 - 26 March 1902) was born in England. He was a mining magnate who spent most of his time in South Africa. He founded the company De Beers, which today markets 40% of the world's rough diamonds. Rhodes, A believer in British colonialism, was the founder of the southern Africa territory that became known as Rhodesia, in his honour, in 1895. Cecil Rhodes died in 1902, aged 48. After his death, the government arranged for his body to be taken by train to Rhodesia where he was laid to rest at World's View, a hilltop just south of Bulawayo. His grave site is now a part of the Matobo National Park in Zimbabwe which was at the time of his death, Rhodesia. 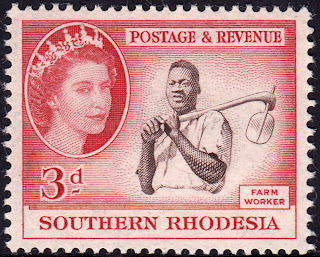 The focus of this stamp is a farm worker. Tobacco and cotton were the dominant farming industries in Southern Rhodesia. It was these industries that led to a boom in immigration to the colony in the 1920's. Unfortunately many farm workers were considered no better than slaves at this time. The politically turbulent history of this colony is beyond the scope of this humble article. The following ARTICLE may be of some interest to those looking for some further reading. And you may also wish to check out this PAGE