The schooner Bluenose was launched in Nova Scotia on 27 March 1921. She was designed by William Roue as both a fishing and racing boat. Her racing career wasn't initially successful, losing her first two races. But then she came into her own, and over the next seven years she was undefeated. The Bluenose also worked hard as a fishing vessel. She won the largest catch of the season award several times. In the 1930's motorised vessels rendered fishing schooners obsolete. As a consequence, Bluenose was re-purposed as a freighter. It was in 1946 in this capacity that she ran aground on a reef in the West Indies with a hold full of bananas. She was sadly wrecked beyond repair and abandoned on the reef where she later sank. A sad ending for such an illustrious vessel.

The 50c Bluenose stamp was issued in 1929 by Canada as part of the King George V "Scroll Issue" definitives. I may be biased, but I reckon this stamp is by far the best in this particular set. This truly gorgeous stamp was engraved by Harold Osborn. And what a superb job he did. 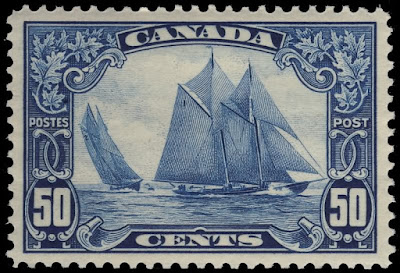 There are two schools of thought over what this stamp depicts. Some say the image illustrates the Bluenose ploughing ahead of a rival vessel, the American vessel, Columbia. While others say that that is not the case at all. They hold that the image is a montage of the Bluenose, depicting it from different angles from two different photographs by W.R. MacAskill in 1922 or 1923. So two Bluenoses on the same stamp! What do you think? I personally lean toward the belief that it is the Bluenose depicted twice, a form of old school motion capture shot of the Bluenose racing off Halifax. Perhaps the numbers 1 and 2 engraved on the mainsail of each vessel respectively is a clue to this.