Captain Charles Sturt came to Australia in 1827. The following year he set out to explore the Macquarie River. He also discovered another river which he named the Darling River.

On 7 January 1830, he set off on a second expedition, this time sailing in a whaleboat, Sturt and his team travelled down the Murrumbidgee River to its junction with the Murray River, which he also named. He continued down the Murray and reached Lake Alexandrina a month later. The journey was arduous and the party suffered many hardships along the way.

On 2 June 1930 Australia issued a set of two stamps to commemorate the Centenary of Charles Sturt's Exploration of the Murray River. It was issued in two denominations: 1½d red & 3d blue. The design for the Sturt commemorative features the portrait of Sturt by J.H. Crossland flanked by lyrebird tails. It also includes spearheads and shields typical of those used by Aborigines in the area. The stamp design was the work of R.A. Harrison. It was engraved by Frank Manley. 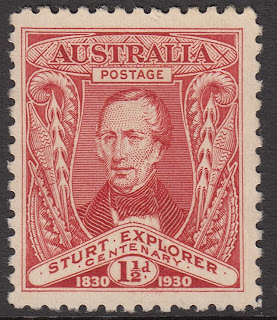 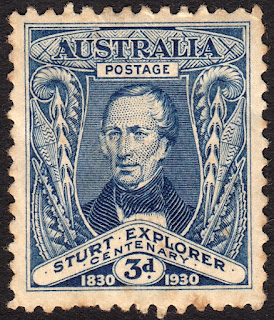 Many interesting designs were considered. Below is an unadopted design depicting a portion of the Murray River. 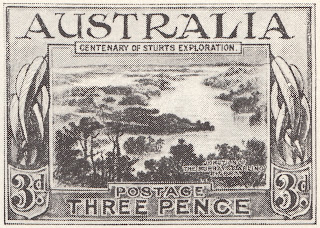