The first permanent settlement on the west coast of Australia was created in 1829 on the Swan River. It is true a settlement had begun in 1826 at King George Sound, now Albany, but this was only temporary. The expedition to found a permanent colony was driven by Captain James Stirling, who in 1827 explored the Swan River in the HMS Success. The fledgling colony had a very rough beginning. It fought through many trials before it finally found its feet. Originally, it was called The Swan River settlement. It was changed to Western Australia in 1832, but it retained the informal name of Swan River for many years. Captain Sterling was the first Governor.

On 28 September 1929 Australia issued a commemorative stamp to celebrate the Centenary of Settlement in Western Australia. 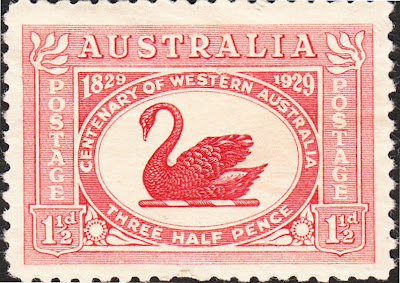 The design of the stamp was prepared by Mr. G. Pitt Morison, who was the curator of the National Gallery, Perth. The desgin incorporated the famous black swan, the emblem of the state. It also included in the top corners above 'Postage' kangaroo paw flowers, as well as eucalyptus leaves and flowers, which can be seen below the written value. This stamp was engraved by Frank Manley.

There were many designs to choose from. G. Pitt Morison submitted several. This is another of his designs...


This wasn't the first time a swan was depicted on a stamp. During the colonial period, Western Australia issued many lovely swan stamps. Here's one from 1854 - Australia's own Penny Black. 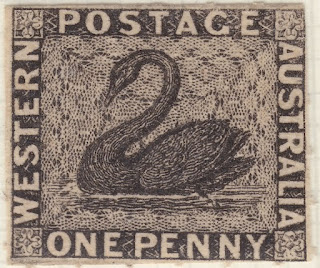