French explorer Jacques Cartier has become famous for his explorations along the St. Lawrence River, and also for giving Canada its name. Born 31 December, 1491, in Saint-Malo, Brittany, France, with the heart of an adventurer, Jacques Cartier came to the attention of King Francis I of France in 1534. It was after this first meeting that Cartier's name was destined for the record books.

The King, impressed by his already strong skills as a mariner, commissioned Cartier to embark on a voyage to the eastern coast of North America, to an area then called the "northern lands". This was the first of three voyages Cartier would take across the Atlantic for his king. Cartier was given command of two ships and 61 men for the journey. His mandate: to search for gold, spices, and a passage to Asia. The small fleet set sail on 20 April 1534, arriving on the west coast of Newfoundland 20 days later. On this first voyage, Cartier discovered Prince Edward Island and sailed through the Gulf of St. Lawrence, past Anticosti Island. But alas, no gold or passage to Asia was found. Nonetheless, when he returned to France, King Francis was so impressed by his report that he decided to send Cartier on a second trip, scheduled for the following year.

In May 1535, Cartier set sail again for North America. This time round his fleet consisted three ships with 110 men, including two Indians Cartier had captured previously (perhaps his last voyage). The two Indians were taken to serve as guides. On this journey Cartier navigated his way down the St. Lawrence river, as far as Quebec, where he established a base. There he remained until September when he decided to push further downriver to what would become Montreal, the promise of all that wealth setting his blood aflame. In the Montreal area he stumbled across the Iroquoi, who lived in that region. They welcomed him and his men, and went on to tell him that there were other rivers that led farther west, where gold, silver, copper and spices could be found. This was exactly what Cartier had been yearning to hear! But before they could continue any further downriver, winter came. The river morphed into angry rapids, rendering it impassable. Additionally, it is said that Cartier and his men somehow angered the Iroquois during this visit. Cartier was forced to wait until spring, however, for the ice to melt. But as soon as the ice was gone, he beat a hasty retreat back to France, taking with him some of the Iroquois chiefs he had met and captured. This was not the wisest diplomatic move! Upon his return, Cartier could only report to the king that he had been told that untold riches lay farther west. And also that a large river, said to be about 2,000 miles long, possibly led to Asia. This information seemed to be enough to convince King Francis to fund a third voyage west. A voyage that proved to be Cartier's last.

Six years later Cartier left for the west for the last time with a fleet of five ships. This time, however, his mandate had changed. The idea of finding a passage to Asia had now been abandoned. His mission this time was to establish a permanent settlement "along the St. Lawrence River on behalf of France" (Wiki). A few months after he left, a group of colonists were sent in his wake. On arrival, Cartier again set up his base at Quebec. While waiting for the colonists, they explored the area and happened upon what they thought to be an abundance of gold and diamonds. Cartier must've thought all his Christmas' had come at once! Here before him was the mother-lode he'd been dreaming about. having discovered what he conceived to be his ticket to untold wealth, Cartier abandoned the base and made a bee-line back to France. Unfortunately on his way back, at a stopover in Newfoundland, he happened across the colonist fleet. The leader of the fleet was disgusted with Cartier and ordered him back to Quebec. But Cartier had other ideas. There was no way he was going to jeopardise his dreams of being filthy rich and the envy of all society. He thus ignored the leader of the colonists, and that night, under the cover of darkness, sailed for France, his riches safely in his grasp.

As is often the case with grandiose thoughts, Cartier's dream was nothing more than an illusion. In a twist of tragedy, fit for the pages of a Greek play, Cartier returned to France to discover his precious gold and diamonds were completely worthless! This was the sad conclusion to Cartier's state-funded explorations. He eventually retired from the spotlight with a career tarnished by his shady dealings with the Iroquoi and abandoning the colony in Quebec (the colonists actually abandoned the settlement a year later after only just surviving a bitter winter). As an interesting footnote to this story, France didn't return to Canada for a half a century.

***
On 20 July 1934 France issued a set of two stamps commemorating the 400th anniversary of Jacques Cartier's first voyage to Canada. The set consisted one design issued in two values, drawn and engraved by Achille Ouvré from a portrait by Canadian painter, Théophile Hamel (1817-1870), of François Riss (since a portrait of Cartier himself doesn't exist). There are some who believe Pierre Gandon's statement that Ouvré used him as the model for his portrait of Cartier. But this I will leave for a future blog. For now let's simply take a look at Ouvré's beautiful design! 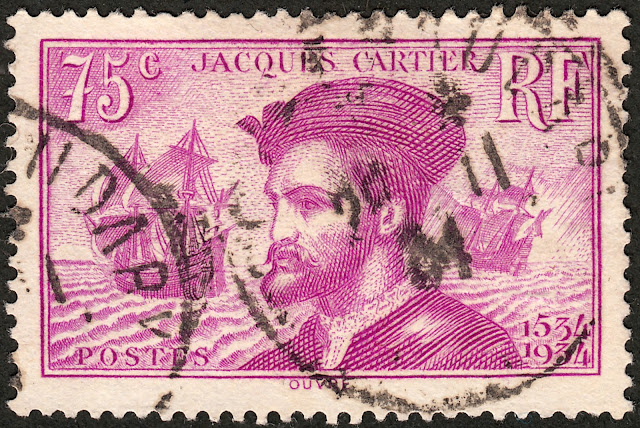 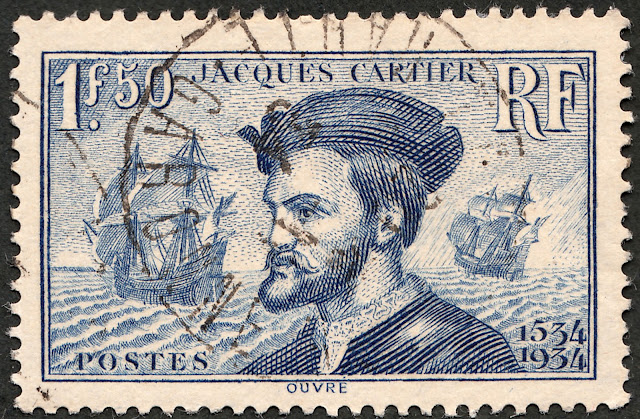 ***
Incidentally, this design is one of many featuring the explorer, Jacques Cartier. One of my favourites is a stamp issued in Canada on 1 July 1934. 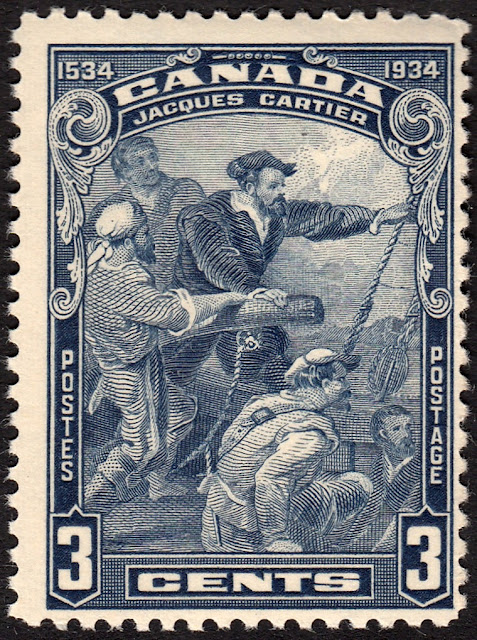