Once upon a time there was a sad, grieving widow. Her name was Mathilda of Tuscany. One day while sitting by the cool waters of a nearby spring, Mathilda bent forward to regard the aquatic life swimming without care in the clear water. When she leaned back she noticed to her extreme horror that her wedding ring was no longer on her finger. Her mind reeled. Her heart began to thump wildly. Her ring! her precious wedding ring. Her only remaining link to her deceased beloved. Gone! No. It could not be possible. She looked back at her hand. Yes, the ring was definitely missing. Oh no! She began to weep...
Suddenly the water before her stirred, and there appeared a trout. She gasped. For in the mouth of the trout was her wedding ring! She gratefully accepted the ring from the trout. Then exclaimed, "Truly this place is a Val d'Or (Golden Valley)." In fact, so happy was she that she funded the construction of a monastery on the site, a monastery that became known as Orval Abbey. The word Orval perhaps deriving from Val d'Or. What a wonderful tale of how Orval Abbey came to be!
***
However true the above tale may be, what we do know is that in 1070 a group of Benedictine monks were invited to the site by Arnould, Count of Chiny. The monks began work on a monastery, but upon the death of the Count some forty years later, the monks left, abandoning their work. But a community of Canons Regular moved in and completed the work. The abbey church was consecrated on 30 September 1124.

Then in 1132 a group of Cistercian monks turned up. The two groups merged into one community within the Cistercian Order. The first abbot of this unified group was Constantin. Then sometime in the mid 13th century the monastery was destroyed by fire. The repairs took over 100 years to complete.

For the next few hundred years the monks lived peacefully in the monastery. Then in the 15th century turmoil began. The monastery was used as a foundry during France's wars with Spain, making it a target. Then came the Thirty Years War (1618-1648). In 1637, French mercenaries raided the monastery, and for the second time in its colourful past, it was destroyed by fire. It seemed the monastery had seen more than its share of the ravages of fire. But fate strongly disagreed. In 1793, amidst the chaos of the French Revolution, the monastery was used to house Austrian troops. The French forces got wind of this, and attacked the monastery, burning it down completely! Now homeless, the monks left.

The monastery sat in ruins for nearly one hundred years before the land was purchased by the Harenne family in 1887. The land was donated back to the Cistercian Order, a new monastery was constructed, and in 1948 its church was consecrated. The ruins of the old abbey can still be visited today. And if you visit you may like to partake of some beer homemade by the monks, using the water from the famous springs.

***
On 15 September 1928, Belgium issued a set of nine stamps commemorating Orval Abbey. Two of the stamp were printed in Photogravure and are therefore outside the scope of this blog. The other seven stamps, in which there are three designs, were designed and engraved by Gaston Gandon. These stamps are truly magnificent. In fact, one of the designs happens to be an all-time favourite of mine.

***
The first design features a Cistercian monk carving the capital of a column. This design was printed in two values. 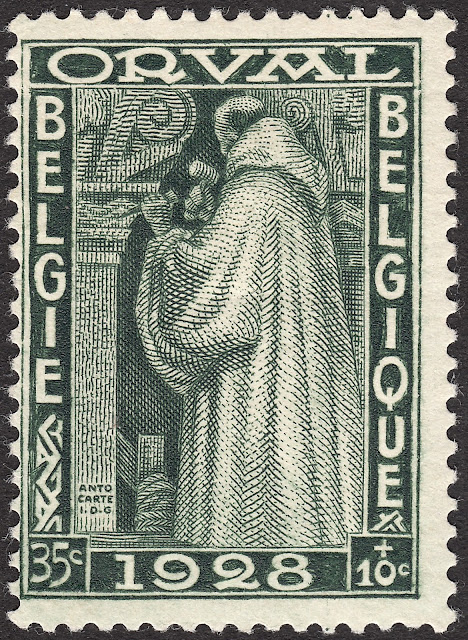 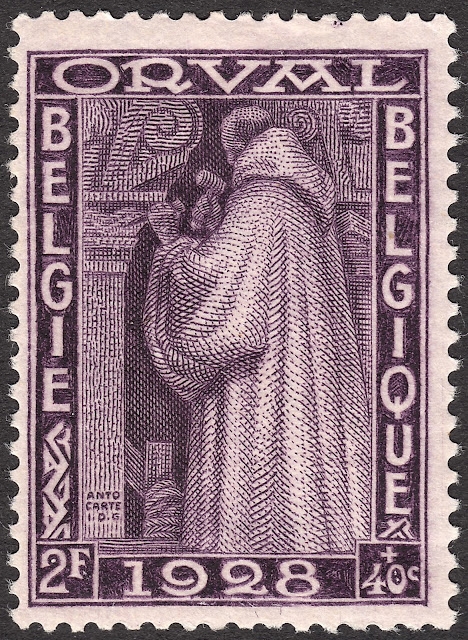 ***
The second design features Mathilda of Tuscany taking her wedding ring from the mouth of the trout. Gandon has managed, rather masterfully, to incorporate the abbey arms, which show the trout and ring. This design was printed in three values. To date I only have one of these values: 1,75f + 35c dark blue. 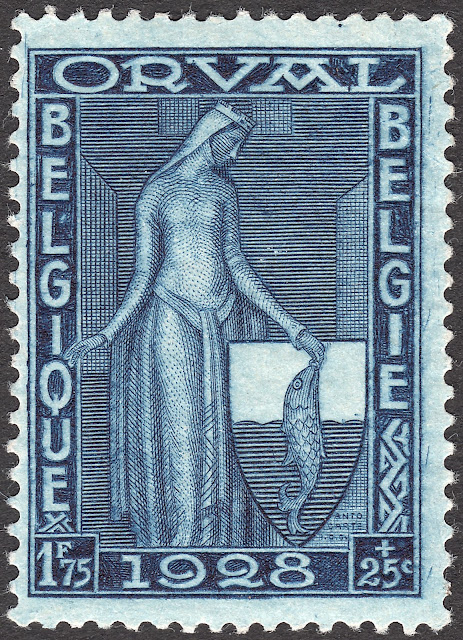 ***
The third and final design features a view of the ruins of Orval Abbey. This design was printed in two values. 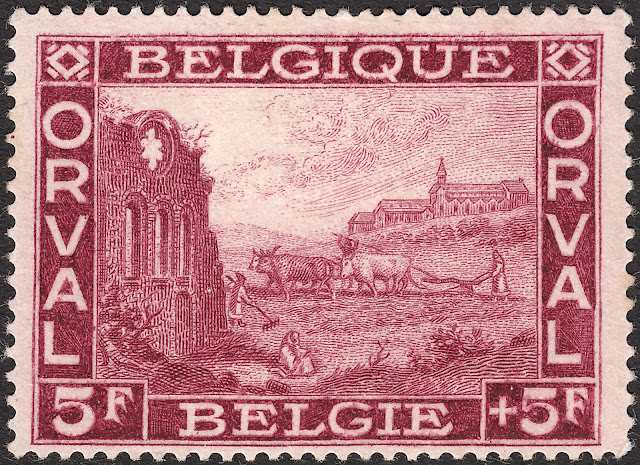 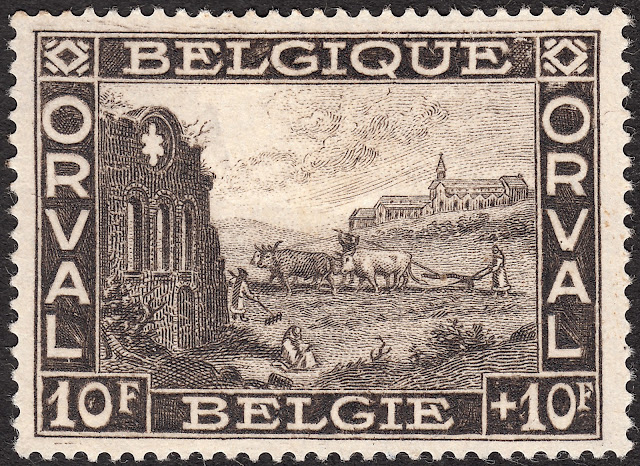