Watching the movie Those Magnificent Men in their Flying Machines as a kid fascinated me. Seeing the fantastic array of early aircraft got me well and truly hooked on aviation history. Since that day I've been captivated by the evolution of aircraft and the talent behind the different designs that grace our skies.
***
The French aircraft company Aéroplanes Morane-Saulnier has a rather interesting history. It was founded in 1911 by Raymond Saulnier and the Morane brothers, Leon and Robert. The first plane this company produced was the Model A (also called the Morane-Borel), a monoplane design. This design used a wing-warping mechanism for control. This method of controlling the aircraft was developed by the Wright Brothers and first used on the Wright Flyer  in 1903. The Model A proved to be a cut above the rest when on 26 May 1911 it won the Paris to Madrid Race. The winning pilot was Jules Védrines. Below is a great pic of a Model A c. 1911. 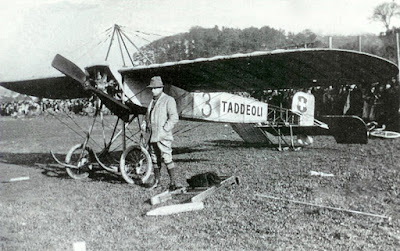 The success of the Morane-Saulnier company continued with the Type G, the first commercially successful design, This was another monoplane with wing warping technology. This series of aircraft had a very successful racing career, setting numerous records. Originally a two-seater, the Type G was tweaked a bit and turned into a single seat fighter plane, known as the Type N. Speaking of fighting, it is interesting to note that the Morane-Saulnier company played a significant role in the development of the technology allowing a machine gun to fire through a propeller without destroying it, using what was called a Synchronisation Gear. This revolutionary technology changed the face of aerial combat in World War I.

In the early 1950s, responding to the needs of the French Air Force, the Morane-Saulnier company began designing jet trainers. Their first design, the MS.755 Fleuret, was not as effective as hoped, so they went back to the drawing board. What resulted from this was the sleek-looking four-seat aircraft, MS 760 Paris. This aircraft was used by the French Defence Forces, and it was also sold to Argentina and Brasil for use in their Air Forces.
***
On 16 February 1959 France issued an airmail stamp featuring the MS 760 Paris. Incidentally, this was the last stamp issued in a series of airmail stamps that began in 1954. The stamp had a face value of 300f and it was designed and engraved by Pierre Gandon. 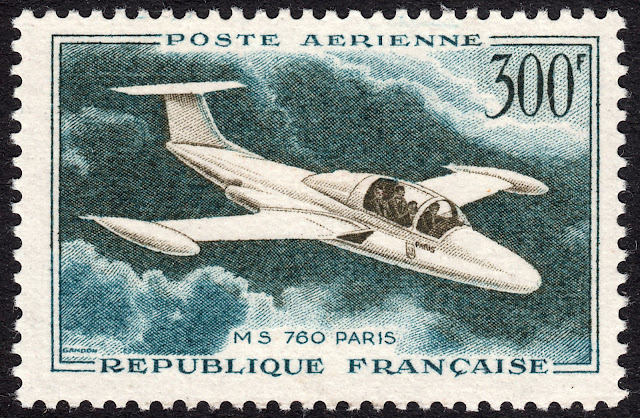 The detail is of lovely design is excellent. We can even see the four people sitting in the cabin. 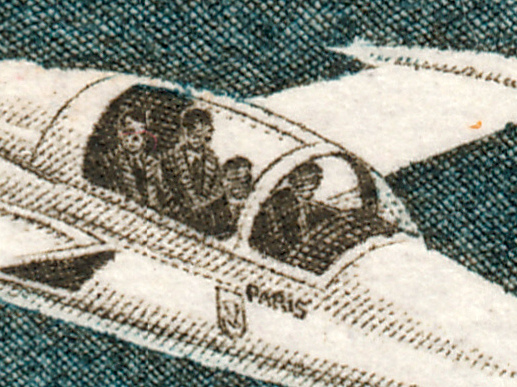 ***
In 1960 the franc was revalued and called the "New Franc".100 Old Francs became 1 New Franc, or NF. With this revaluation new airmail stamps were required. This lovely stamp was re-issued with a new 3f value. 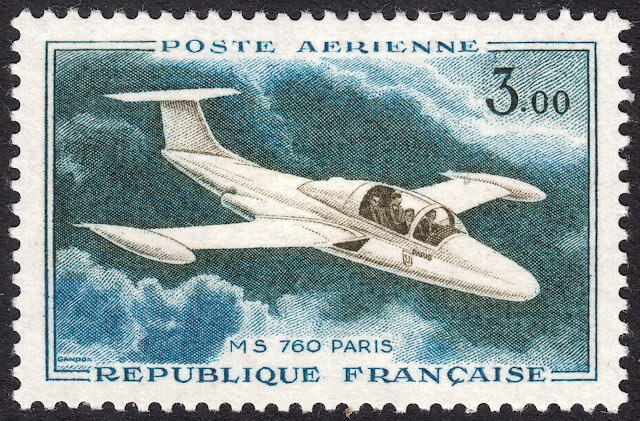