France 1974 - Medal of the French Resistance

The French Resistance played a vital role during World War II. Known in France as La Résis the Resistance organised themselves into small groups of armed men and women who worked against Nazi German occupation through various forms of guerrilla warfare and providing intelligence information for the allied forces. Additionally, the Resistance helped allied troops caught behind enemy lines providing them with possible escape routes. Perhaps one of the most important roles of the Resistance was to aid significantly the successful advance of allied troops through France after the Normandy invasion on 6 June 1944.
To honour the service of these brave men and women, the French Resistance medal, Médaille de la Résistance, was a decoration awarded to members of the Resistance. The award was established on 9 February 1943 to...

"...recognize the remarkable acts of faith and of courage that, in France, in the empire and abroad, (the Resistance) have contributed to the resistance of the French people against the enemy and against its accomplices since 18 June 1940".1

***
On 23 November 1974 France issued a set of three stamps commemorating the 30th anniversary of the liberation of France from the Nazis. One of these stamps features the French Resistance Medal. The stamp was designed and engraved by Claude Haley. 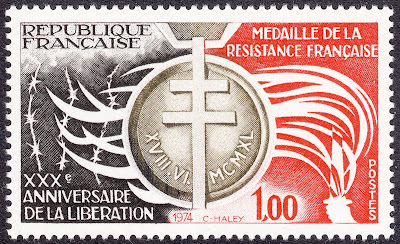 The design of this stamp is very evocative. On the left is a representation of French imprisonment under Nazi Germany. On the right a burning torch suggests of liberation from oppression. And in the centre of the stamp is a depiction of the French Resistance Medal.
References:
1. "History: Médaille de la Résistance", Chancellerie de l'Ordre de la Libération, 28 October 2006.
Until next time...
Posted by Stamp Crazy! at 09:59