It's official. I now have every single stamp Pierre Gandon engraved for French Southern and Antarctic Territories or Terres australes et antarctiques françaises, shortened to TAAF. Sounds pretty great! Well, perhaps it would if Gandon had engraved more than one stamp for TAAF. That's right. He engraved one stamp, and I now have it. Ergo, I have the full set! Anyway, that's enough being silly. Let's get down to business.
***
Jean-Baptiste Charcot was born 15 July 1867 in Neuilly-sur-Seine. Charcot, like his father Jean-Martin Charcot, was a French medical doctor. He was also a scientist with a passion for polar science. He was also n excellent sailor, having won two sailing Gold Medals for France in the 1900 Olympics.

In 1904 these two passions combined when he was given the amazing opportunity to lead a French Antarctic Expedition to explore the west coast of Graham Land. This expedition, on the ship Français, lasted for three years, ending in 1907. During this expedition, Charcot visited the Palmer Archipelago and the Loubet Coast. He took photos at both places, giving the world a glimpse into the wondrous world of Antarctica. I, for one, have always dreamed of seeing Antarctica in person, so I can only imagine the thrill it must have been for these explorers visiting somewhere so remote and so difficult to reach - even now it isn't that easy to do (except if you have lots of money)!
One expedition was definitely not enough for Jean-Baptiste Charcot. In 1908 he led another two year expedition to Antarctica. This time he travelled in a ship, which, what I think, had a really cool name. It was called Pourquoi-Pas? In English this means Why not? Love it! Anyway, back to the expedition. This time round Charcot explored the Bellingshausen Sea and the Amundsen Sea. In the process he discovered Loubet Land, and Marguerite Bay. He also discovered a third island, which he named Charcot Island, after his father, Jean-Martin Charcot.

Charcot went on to explore areas around Greenland in Pourquoi-Pas?. Tragically the ship was wrecked off the coast of Iceland in 1936 in a severe storm. Charcot was never seen again. After the disaster a monument was erected in honour of Charcot in Reykjavík, Iceland by sculptor Einar Jónsson.

***
On 19 December 1961 a stamp was issued for TAAF commemorating the 25th anniversary of the death of Jean-Baptiste Charcot. This stamp was designed and engraved by Pierre Gandon. 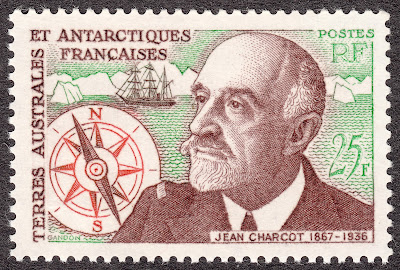 This fabulous design features Charcot in the foreground, gazing toward the horizon, to new adventures. And yet there is a sadness in his eyes, too. Perhaps a reflection of adventures unfulfilled. To Charcot's left we see a compass suggesting his explorations to the south and the north. The icy shores of Antarctica lay in the background. And lying at anchor is the ship PourquoiPas? perhaps. In all, this is an elegant design.