The best decision I ever made in my stamp collecting story was to pursue a collection of engraved stamps. True, it is the type of collection I will probably never even get close to completing. But that's not what really matters, is it? What matters is the adventure, the things we learn, and the little engraved gems we discover along the way. Now, I'm very new to the study of engravers. To be honest I only know the names of a handful, but the number is growing daily, and it's rather exciting!

In fact, I just added a new name to my repertoire today - Achilles Ouvré. I know very little about this engraver yet, but I found a few of the stamps he worked on and I thought I'd share them with you. They are stunning!

The first stamp depicts Johann Wolfgang von Geothe. The detail on this stamp is remarkable. Just look at the expressive beauty in the face. 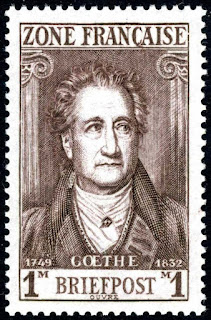 Johann was a German writer (1749-1832) who penned poetry, drama in verse, and an autobiography. I found when I did a search on him that Johann was also responsible for the odd cool quotable quote. Here's one I like:

We do not have to visit a madhouse to find disordered minds; our planet is the mental institute of the universe.

The next stamp features Friedrich von Schiller. Again the detail is amazing and so life-like. 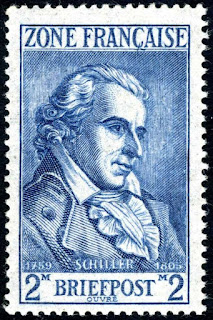 Friedrich (1759-1805) was another German writer who wrote poetry and plays. He was also a physician, philosopher, and historian. 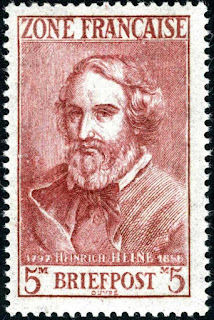 Not surprisingly, Heinrich was also a German writer. He was also a poet, essayist, journalist, and strangely, considering he was a writer, he was a literary critic.

I really like the engraving style of Ouvre. I will definitely be on the lookout for more of his work.